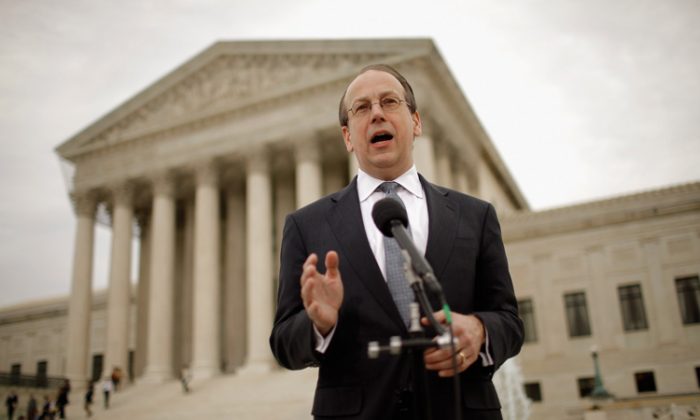 Paul Clement, the attorney representing the 26 states challenging the Patient Protection and Affordable Care Act, talks to the news media outside the U.S. Supreme Court on the third day of oral arguments over the constitutionality of the act. (Somodevilla/Getty Images)
US

After the Arguments, What Did the High Court Decide?

WASHINGTON—After three days of oral arguments on the constitutionality of the Patient Protection and Affordable Care Act, better known as the Affordable Care Act (ACA) or less formally, Obamacare, the justices met on Friday in a conference room off Chief Justice John Roberts’s chambers, where they discussed the Act behind closed doors.

We won’t know what they have decided until the end of June; a justice is also not locked into the position taken at the closed conference. According to news reports, Justice Anthony Kennedy had initially taken the side of overturning Roe v. Wade in Planned Parenthood v. Casey (1992), but changed his mind and wrote the majority opinion upholding Roe.

The evening news portrayed the three days of arguments as being between five conservative justices battering the government’s defense of the Affordable Care Act, and four liberal justices coming to its defense. Commentators stated that the Supreme Court seemed to be leaning toward striking down the individual mandate, if not the entire law.

But making a prediction that the Supreme Court will overturn Obamacare based on a count of the number of conservative and liberal justices would be far too simple. A careful examination of the court transcript revealed an anguished Kennedy, searching for a way that he, in good conscience, could uphold the law. Further, Chief Justice John Roberts sharply questioned the opponents of the law, showing that he may have reservations about overturning it.

Simon Lazarus, policy counsel for the National Senior Citizens Law Center, disputed the consensus of commentators and said, after reading the transcript, that Solicitor General Donald Verrilli’s “performance appears quite strong—and possibly more effective than that of his opponents, Michael Carvin and the justly renowned Paul Clement.”

Indeed, Verrilli’s case is tightly woven. The individual mandate—requiring nearly every American to have health insurance—was the method Congress devised to address “a very serious problem” of 40 million Americans not having health insurance, neither through an employer nor through the government programs Medicare and Medicaid.

Incidentally, the individual mandate concept was introduced by Republicans as an answer to Hillarycare in the 1990s. It was the brain-child of the conservative Heritage Foundation. Democrats eventually embraced it for ACA as an alternative to Single Payer and because it preserved the private insurance market, which “has more choice than would the traditional Medicare/Medicaid-type model,” Verrilli said.

Verrilli justified Congress’s power to invoke the individual mandate, saying it was Congress’s “method of financing health, the purchase of health care. That itself is economic activity with substantial effects on interstate commerce.”

Verrilli described the insurance market as one in which 50 percent of the people in this country get their health care through their employer. It’s made much more affordable through a massive Federal tax subsidy of $250 billion a year. They don’t have to worry about pre-existing condition discrimination and differential pricing practices like people in the individual market do.

If Congress had required the insurance industry to sell individual policies without pre-existing condition discrimination and differential pricing practices—something everyone agrees is within Congress’s power—and without a minimum coverage provision (that is, the individual mandate), the rates become unaffordable, as can be seen in states that tried it.

Justice Samuel Alito noted that under the individual mandate the young, healthy people will be forced to subsidize health care services of others.

The justices raised issues about the involuntary nature of the requirement. Kennedy asked, “Can you create commerce in order to regulate it?” Justice Antonin Scalia said, “My failure to purchase something in that market subjects me to regulation.”

The discussion also spoke of the lack of limits to the Congress’s power. The conservative view of the U.S. Constitution, expressed at the oral hearing by Justice Scalia, is that Congress has only “enumerated powers,” mostly listed in Article 1, Section 8, where 17 are listed, including the regulation of commerce among the states. Conservatives want to find the line between legitimate powers of the federal government and the powers left to the states and individuals.

This line of thinking leads to questions like, if Congress can require one to purchase health insurance, why not broccoli that’s good for you, or cellphones to use in a medical emergency? They were uncomfortable forcing people to buy something they don’t want.

Justice Kennedy at one point asked, “Can you identify for us some limits on the commerce clause?”

The solicitor general said that the individual mandate was created to regulate health care insurance, and it’s a market people enter into involuntarily, not knowing the moment they will need health care. He said everyone at some time in their life will need health care, and so it is only a matter of time before one must pay for health insurance. The ACA wants the individual to begin paying into the market before one needs care; otherwise, emergency rooms will be used, where no one can be turned away, and others will have to bear the cost.

Toward the end of the discussion, the Chief Justice may have bought into much of the argument that Verrilli made. Twice Roberts said, “We’ve accepted the argument that this is a market in which everybody participates.”

To Michael Carvin, an attorney challenging the law, Roberts said, “I don’t—I don’t think you’re addressing their main point, which is that they are not creating commerce in health care. It’s already there, and we are all going to need some kind of health care; most of us will at some point.”

Kennedy too realized that the health care insurance industry is different from other industries in that the young, healthy people who are uninsured are nonetheless in the insurance market.

“The young person who is uninsured is uniquely proximately very close to affecting the rates of insurance and the costs of providing medical care in a way that is not true in other industries. That’s my concern in the case.”

Carvin’s response was very telling. “And, Your—I may be misunderstanding you, Justice Kennedy. I hope I’m not.”

Carvin was evidently surprised and worried at Kennedy’s reasoning; Justice Kennedy may have found the pathway to upholding Obamacare.