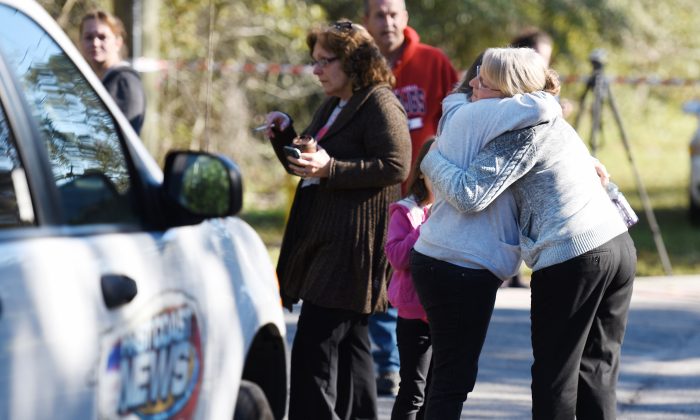 Maggie Smith, one of the people involved in the search for missing toddler Lonzie Barton hugs Judy Bearfoot before a news conference Monday, Jan. 11, 2016, in Jacksonville, Fla. Authorities found human remains Monday that they believe are those of a Florida toddler who was reported missing last summer. The remains are believed to be those of Lonzie Barton, Jacksonville Sheriff's Office Chief of Investigations Tom Hackney said. (Bob Self/The Florida Times-Union via AP)
US

After Searching for More Than 100 Days, Officials Say Search for Lonzie Barton Is Over

Police in Jacksonville, Florida, found what they believe are the remains of a missing toddler, and have called off the search for him.

Neighbors described the area where the remains were found, near Snyder Street in the Bayard neighborhood, as “very swampy.”

“I mentioned several times that that little boy didn’t need to be discarded like a piece of trash, and today we were able to take what we believe to be him from being disposed just like that in the hopes that he can spend his eternity in somewhere that’s peaceful and not somewhere that is basically a garbage heap,” said Tom Hackney, the Jacksonville Sheriff’s Office chief of investigations, according to News4. “That’s just wrong.”

Ebron first reported Lonzie missing. He was the child’s caregiver.

Hundreds of officers were involved in the search, which lasted 172 days.

BREAKING: JSO confirms they have found what they believe are the remains of Lonzie Barton. pic.twitter.com/4rsm2RrwXL

Though the search is over, though, the case isn’t.

“This case isn’t over,” said Hackney. “This is the first step in justice. We’ve worked with Ruben Ebron and his attorneys throughout.”

Ebron has been leveled with multiple charges, including two counts of child neglect, one count of giving false information to investigators, and conspiracy to escape a county detention facility.

Ebron says he left Lonzie and his five-year-old sister in a car parked outside his apartment while he went inside. The five-year-old wandered into the apartment, and when Ebron ran outside he found someone driving off with Lonzie still in the vehicle, he said.

But surveillance footage indicated that he actually drove the car away before ditching it and running back to the apartment to call 911, and Lonzie’s mom, Lonna Barton, was later arrested for child neglect and lying to police, to which she pled guilty.

She testified at a pre-trial hearing recently that Ebron sold drugs every day, including when her children were around.

Lonzie’s father Chris Barton, who is in jail on drug charges, was briefed on the discovery.

Other family members were glad the body was found, saying it brought some closure.

“It wasn’t what I wanted to hear, but it is closure in this part. We can bring him home and put him to peace, put him to rest,” Valerie Crews, Lonzie’s aunt, said. “And now we can wait for justice for him.”