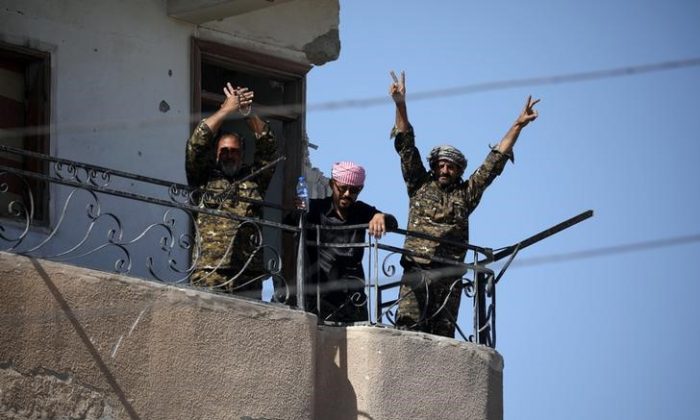 Fighters from the Syrian Democratic Forces give the "V" sign at the frontline in Raqqa, Syria on Oct. 16, 2017. (REUTERS/Rodi Said)
Middle East

After Retaking Raqqa From ISIS, US Moves to Stabilize the Region

The United States is moving to the next phase in its push to destroy the ISIS terrorist group, after coalition forces retook the Syrian city of Raqqa, pushing the terrorist group out of its last stronghold.

The defeat of ISIS in Raqqa comes just a few months after its defeat in early July in Mosul, Iraq. The loss of these two key cities is bringing an end to the terrorist group’s proclaimed “caliphate.” The next step is to stabilize the regions, and on Oct. 22, Iraq and Saudi Arabia held their inaugural coordination council meeting to help with this effort.

“As major military operations near conclusion, Iraq’s financial needs for stabilization and reconstruction are evident,” said Secretary of State Rex Tillerson, in a statement issued from the meeting in Riyadh, Saudi Arabia.

Tillerson said the coordination council will help the nations to more closely cooperate in battling ISIS and will “support the rehabilitation of facilities and infrastructures in the areas liberated.”

“Such reforms will encourage foreign investment that is vital to Iraq’s reconstruction efforts,” he said. “This will be critical for winning the peace that has been earned through hard-fought military gains.”

President Donald Trump issued a statement on Oct. 21 marking the victory over ISIS in Raqqa, which was carried out by the U.S.-backed Syrian Democratic Forces. He said, “Together, our forces have liberated the entire city from ISIS control.”

Trump said the United States is now transitioning to a “new phase” in the conflict, “in which we will support local security forces, de-escalate violence across Syria, and advance the conditions of lasting peace, so that the terrorists cannot return to threaten our collective security again.”

“Together, with our allies and partners, we will support diplomatic negotiations that end the violence, allow refugees to return safely home, and yield a political transition that honors the will of the Syrian people,” Trump said.

He said, “The defeat of ISIS in Raqqa represents a critical breakthrough in our worldwide campaign to defeat ISIS and its wicked ideology.”

Operation Inherent Resolve, the coalition mission to defeat ISIS, issued a press release on Oct. 20 highlighting the significance of the latest battle. It refers to ISIS as “Daesh,” a derogatory play on the group’s name that is hated by ISIS. Daesh means “to crush.”

“Daesh’s loss of Mosul and now Raqqah are turning points for the terrorist organization, whose leaders grow ever more distant from a dwindling number of terrorist adherents,” it states.

It notes that Raqqa was first occupied by Syrian opposition forces in 2013, during their fight with the Assad regime, and this fighting transformed into a civil war before the city was taken by ISIS in January 2014. ISIS then declared Raqqa as the capital of its “caliphate.”

For the people living in Raqqa, this meant living through the civil war, then under the brutal rule of ISIS, which the release says “routinely carried out public executions, extortions billed as ‘taxation,’ and forced conscriptions.”

During the three years of ISIS rule, according to the release, the city was transformed into a “fortified military prison,” and the terrorists “used hospitals, mosques, schools, and otherwise-protected sites as cover for the planning, execution, and support of military operations.”

“Raqqah was a key location for Daesh’s planning, financing, execution, or inspiration of terrorist activities throughout the world, including attacks in Paris, Brussels, Nice, Manchester, and many others,” it states.

The next stage of the fight against ISIS, in addition to the reconstruction of the areas the group occupied, will involve ISIS terrorists facing justice for their crimes. The release states, “Daesh also committed violations of human rights for which individuals will be held accountable.”

Trump also affirmed this point in his statement, saying, “Today, we reaffirm that ISIS leaders, and anyone who supports them, must and will face justice.”