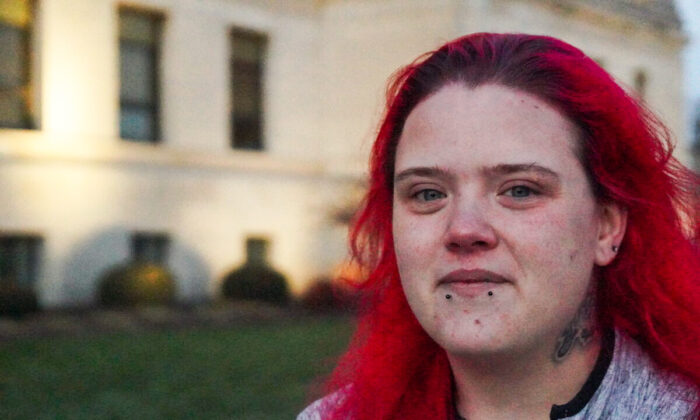 Most Americans remember Anthony Huber’s name because he was shot while attacking Kyle Rittenhouse with a skateboard during the Jacob Blake riots.

Annie Hysell remembers Huber because he was her friend.

During Rittenhouse’s trial, reporters, politicians, radical left-wing activists, and right-wing hecklers portrayed Rittenhouse, and the three men he shot, as heroes or villains.

But none of the events in Kenosha affected them personally, said Hysell.

“It doesn’t affect their real life.

“I remember the second day of riots when the whole town smelled like a campfire, and I delivered a pizza to Ed’s Tires on 60th and 10th … I got out of my car, and I just started crying.”

Despite her tears, she sometimes laughed. Her mood hit the bottom of sadness, bounced up, then fell again.

Watching her hometown burn down around her hurt, said Hysell.

But the left-wing activists on the courthouse steps demanding Rittenhouse’s conviction—carried signs calling the burning “the beautiful uprising”, and proudly referred to “our fires” while on the march protesting against his acquittal.

On Nov. 19, Hysell stood outside the courthouse beside them.

Right-wing counter-protesters called her and her friends “Antifa (a far-left extremist group),” she said.

Tom Heineman, a retired man, said he came to Kenosha to insult the protesters, including Hysell. He described himself as someone with “really, really good insults.”

Some, Heineman said, were obscene. Others mocked the protesters’ chants.

On the courthouse steps, Hysell sat, cried, and hugged her friends.

In the background, the chants, insults, megaphones, interviews, and bullhorn sirens thundered on.

Hysell said she believed Huber was “a good person.”

She would chat with him on Lake Michigan’s dunes, go swimming, and listen to him talk about aliens.

Intentions make someone good, not action, she said.

“You hit someone’s head with a skateboard. Does it make you not a good person?” she asked.

“It’s all about intention. What was your intention behind it? That’s what’s hard to decipher.”

Huber had criminal convictions for strangling his brother and kicking his sister, but Hysell said she doesn’t think of him as a criminal.

Hysell said that she would have told her friend to act differently if she had the chance.

Although she said Huber was a good person, Hysell also said she believed Huber was severely troubled.

“You can kind of tell when people are like that,” she said.

“But I loved him to dear death. That was my friend.”

Hubert was bipolar and had ADHD, she said. His relationship with his girlfriend, Emily Petty, ended three months before the riot.

“I can never imagine him being how people are saying he is, this criminal rioter who attacked Kyle and deserved to be shot,” Hysell said.

He was her friend, she said, and from her eyes all the “17 angles” of camera footage of his death made him look innocent.

Although Hysell said it hurts to see competing political narratives fight over her dead friend, some still offered her comfort.

“To have him die where at least half the world thinks he’s a hero and doing something he thought was right, that probably helps me look at it in a better way.”

After Huber’s death, his friends have had to pick up the pieces, she said.

His mobile phone was taken into evidence by police, but the plan that Huber’s girlfriend paid for wasn’t cancelled.

“She still pays on that phone. They won’t accept that he’s dead,” she said, referring to the phone company.