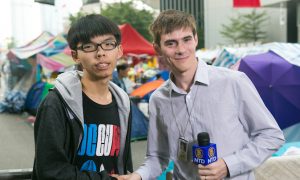 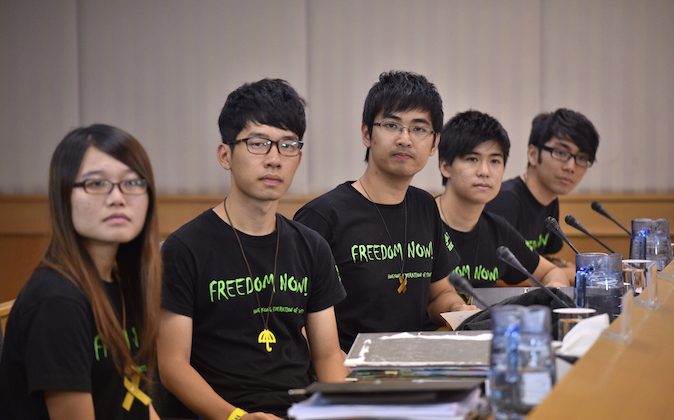 The Hong Kong Federation of Students is looking to ramp up the on-going civil disobedience campaign following the clearing of some protest sites.

HKFS student leader Yvonne Leung said on RTHK’s Hong Kong Today programme that students could target government building in the next phase of the Occupy movement.

“I think we have made it very clear that if [the police] continue the violent way of clearing up the place, we will take further actions,” Leung said.

Leung added that HKFS will release more details after Friday.

Over the past two weeks, police have driven the mainly student-led pro-democracy protesters from a small area outside a government building in Admiralty, as well as a main occupied site in an important thoroughfare in Mong Kok. Police brutality towards protesters and journalists covering the clearing of Mong Kok is currently a talking point on mainstream and social media.

Meanwhile, the Federation of Students has had no success in any of its efforts to secure the Occupy movement’s goal of fully democratic elections in Hong Kong, as well as Chief Executive Leung Chun-ying’s resignation.

HKFS student leaders’ impassioned, well-argued speeches at a student-government dialogue fell upon deaf ears as the Hong Kong government representatives merely repeated their pro-Beijing stance and refused to budge an inch. A planned trip by three HKFS leaders to Beijing to directly petition Chinese premier Li Keqiang was aborted after their visiting permits were cancelled.

Also, after more than fifty days of peaceful occupation, protester numbers have dwindled, and recent polls conducted by local universities revealed that the public is increasingly not in favor of continued occupation.

The last point should not be mistaken for evidence that the movement is losing support, however. In an interview with German international broadcaster Deutsche Welle, Professor Leo K. Shin from the University of British Columbia said that the recent surveys actually reveals that the Hong Kong citizens disagree with the “tactics, not the goals, of the protest.” Referring to a Hong Kong University survey, Prof. Shin notes that the percentage of people who agree with the Umbrella Movement’s goals remain consistent over time.

“So what the polls really showed was that more and more supporters of the protest believed that the protesters need to retreat, regroup, and reflect on the next steps,” Prof. Shin said.

Whatever they are planning, the HKFS intents to stick to its principle of nonviolence for their next step of the protests.

“Should we stray from it, we stand to lose our only weapon.”

In response to Chief Secretary Carrie Lam’s statement that the clearing of Mong Kok would be a welcome “relief,” Chow said: “The government can mock us today, but they won’t stay relieved for long.”

“So long as the issue of democratic reform isn’t resolved, citizens will continue to take to the streets.”