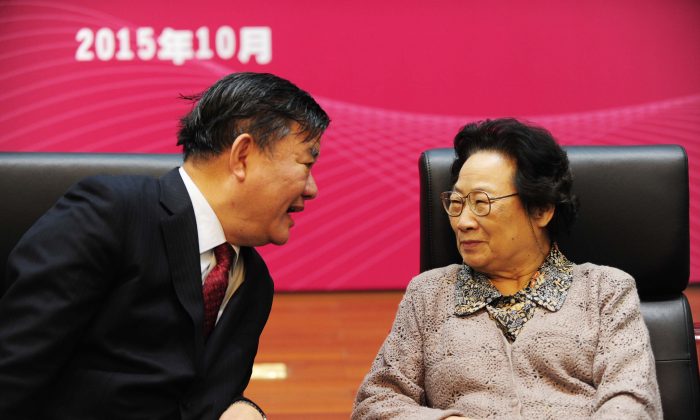 The Chinese regime finally has a Nobel Prize in the sciences, but the leadership and scientific community isn’t happy about it.

Tu Youyou, 84, was awarded the Nobel Prize in physiology or medicine on Oct. 5 by the Nobel Committee of the Karolinska Institute in Stockholm. She won alongside two other scientists, William C. Campbell of the United States, and Satoshi Omura of Japan.

In the 1970s, Tu found artemisinin, which has saved the lives of millions of malaria patients around the world over the last 40 years.

In China, however, her accomplishments are being criticized by her fellow scientists, state media, and Chinese authorities.

The reaction to Tu’s Nobel win relates in large part to the state-domination of the sciences in China, a system to which Tu is largely a stranger—making her win slightly awkward for the establishment.

Chinese media has not reacted well to Tu because of her humble background, and the fact that her win is embarrassing for the Chinese regime, said Chen Pokong, an author of several books on Chinese political culture.

In contrast, state media lauded Chinese writer Mo Yan for winning the Nobel Prize in literature in 2012, and heavily promoted the achievement.

In a telephone interview, Chen told Epoch Times that Tu Youyou winning the Nobel left the Chinese authorities in an awkward position because she is not part of a system they endorse and promote—Tu is not an academician, derived her research not from Chinese science but from traditional Chinese medicine, and is practically a “nobody” from the people and not society’s elite.

Corruption has extended into all aspects of society, from students cheating in exams, to people in the academies plagiarizing and bribing their way to top positions.
— Chen Pokong, Writer and political commentator

Instead, Tu who was once characterized in a 2011 People’s Daily article as being a researcher who goes about her work “silently,” isn’t good at building social relations, and “dares to speak directly” to her superiors instead of being a sycophant.

On the other hand, the Chinese regime aggressively publicized literature Nobel Prize winner Mo Yan because he is practically part of the establishment, being a vice chairman of the Chinese Writers’ Association, a state-run organization.

The Chinese regime “spends a lot of money on sciences and military research, and have nothing to show for but more deadly weapons,” Chen said.

Chen Pokong says the reaction of the Chinese authorities to the Nobel win also shows the prevalence of corruption in China, particular in sectors tied to the state, such as the scientific domain.

The educational institutes run by the communist regime do not prize knowledge when it comes to promoting top people, but are often hobbled by corruption and nepotism, Chen said.

“Corruption has extended into all aspects of society, from students cheating in exams, to people in the academies plagiarizing and bribing their way to top positions.”

A salient example that was given a recent round of publicity is that of Jiang Mianheng, the son of former Chinese leader Jiang Zemin. The younger Jiang was appointed deputy director of the largest and most prestigious scientific research organizations in China, the Chinese Academy of Sciences, in 1999, merely six years after returning to China after completing his doctoral degree in Philadelphia.

Jiang had little managerial experience or academic achievement before his promotion, one that many believed to be due to the identity of his father. In 2005, Jiang was appointed as president of the Shanghai branch of the Chinese Academy of Sciences, a position he just relinquished in January. The publicly stated reason related to his age—but Jiang Mianheng was several years away from retirement. Observers saw in the turn of events a sign of the changed political winds, where Jiang’s father, Jiang Zemin, has been marginalized and threatened in Xi Jinping’s anti-corruption campaign.

Ironically, Tu said she wasn’t surprised with her win because “this was an honor not for me alone, but for all Chinese scientists.”

“Everyone has been researching for decades, and so there’s no surprise in being able to win a prize,” she told a reporter from Chinese newspaper Qianjiang Evening News.

State media said Tu’s achievement was remarkable because she did not belong to a top state scientific institution, did not pursue a doctorate, and did not study overseas—a “Three Withouts” scientist.

But there was an attempt to diminish Tu’s own contributions, and defend the status quo, which involves large Soviet-style research institutions to which scientists allied to the Chinese Communist Party flock.

Tu’s accomplishments aren’t just her own, said these mainstream scientists, in interviews with Chinese media—they pointed out that 500 other scientists also worked on Project 523, the secret military program set up by Mao Zedong, which made key contributions to the isolation of the drug.

When Tu won the prestigious Lasker Prize for Medical Research in 2011 for her work in malaria, establishment scientists in China also sought to emphasize the collective nature of the research involved.

Three days after Tu’s win, The Paper, a semiofficial news outlet, ran a commentary defending academicians, a title given to scholars at China’s top scientific institutes.

Tu didn’t get into the Chinese Academy of Sciences because for many years, the finding of artemisinin was considered a group effort, and her leading role was “heavily disputed” in China’s scientific community, Chinese scientists told The Paper.

As for Tu reportedly being rejected from joining state scientific institutions, that is not unheard of because “it is a common occurrence that’s not limited to only one individual,” another scientist said.

The article also quoted Tu as saying in an October interview with the state-run China Youth Daily that she didn’t mind having no formal positions or awards because she’s “old already.”