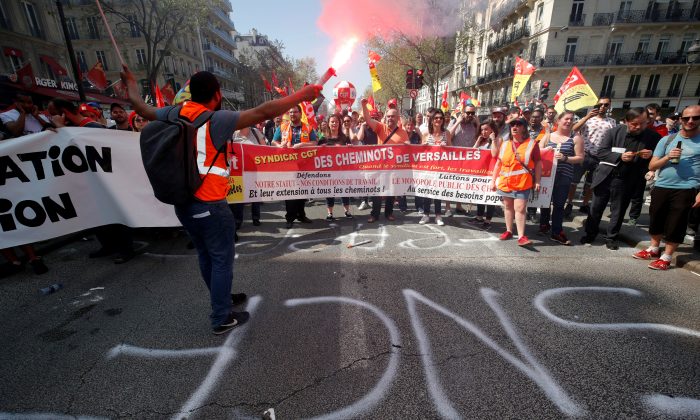 PARIS—In early April, thousands of French rail workers filled a square outside one of Paris’s largest stations at the start of a strike against President Emmanuel Macron’s reforms.

Letting off smoke flares and blowing whistles, they chanted slogans against the president’s plans to shake up the heavily subsidized and indebted state-run SNCF rail company.

More than two months later, on day 27 of a rolling strike meant to cripple rail traffic on 36 days over three months, not a single striker could be seen when Reuters went to the same square in front of the Gare de l’Est.

The strike is still going on; about half of all national and regional rail services were again halted for two days last week. But Gare de l’Est was so empty that birdsong could be heard in the main concourse.

Macron, who said from the beginning that he would not back down, has all but won the war over the SNCF, delivering a powerful blow in his campaign to modernize France’s labor force and end a long economic malaise.

Public support for the strike has fallen, according to opinion polls, and nearly two-thirds of the public back Macron’s proposals to remove some of the SNCF employees’ benefits and cut the company’s debt, a poll by research group Elabe showed.

Commuters have found ways around the strike, using car-sharing apps, working from home, or cycling to work when stoppages hit for two days every five. Fewer train drivers, signal workers, and conductors are now taking part in the strike.

Macron’s party’s strong majority in parliament means he is well placed to win the National Assembly’s backing for a law enacting the reforms to the SNCF in a vote set for Wednesday.

On Monday, a committee from the National Assembly and the upper house Senate jointly agreed on amendments to the text of the law, making passage of it all but certain.

Macron, a 40-year-old former investment banker who has been accused of arrogance, has made clear he will not let strikes derail his ambitions. He told TF1 television in April, “Public opinion is not an objective in itself, sorry to be so blunt.”

Macron wants the SNCF to make a profit but says the reforms are not about preparing the company for privatization.

“The trade unions’ lack of effectiveness is partly due to their fragmentation,” Laurent Berger, the head of the CFDT, told the union’s congress on Friday. “We must show much more clearly that French unions have changed and that there is a reformist stream.”

Macron’s planned reforms would change the SNCF into a joint-stock company, phase out its monopoly on passenger traffic, and mean that future employees will not receive all the benefits that are enjoyed now.

The CFDT has shown no sign that it will extend the strike after the scheduled June 28 end date.

The more militant CGT is expected to reject the law after it is approved by parliament and has said it will launch wild-cat strikes. But Macron, who will turn his attention next to reforming social benefits and pensions—a potentially much tougher battle—has made clear he will not be deterred.

“That some people are not happy doesn’t stop me,” he said in the interview on TF1, adding that he would keep up the pace of reforms in France to “prepare it for the next 50 years.”