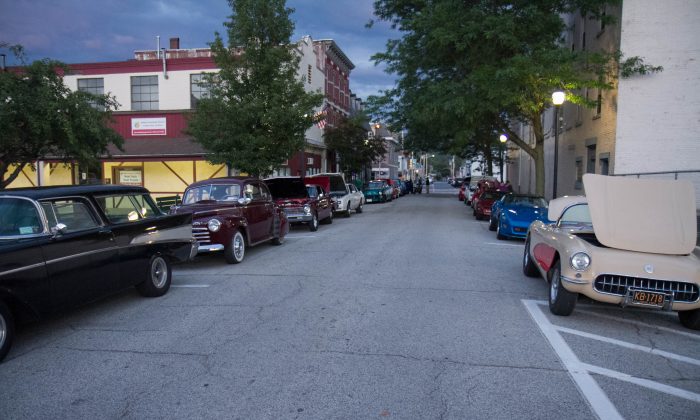 After some ambiguity over whether the car show CruzinPort would return to its home city of Port Jervis this year, hosts Harold and Sheri Butler announced to their fans March 8 that they would be returning for their eighth year.

“After word slipped out that we were considering giving up or that the city was planning to take over the event, there arose such an overwhelming outcry, that we had to reconsider,” they wrote in an email.

The ambiguity arose after the mayor posted a letter Harold Butler had written to City Council on Facebook saying they would not be returning because of a new city events fee that would charge $5 per person to cover cleanup and policing expenses.

“Now being told that we’re a burden to the city to the tune of $400 per event, which is 50 percent of our registration revenue, has just let the air out of our sails,” the letter read.

The city event fee has yet to be made law, but Mayor Kelly Decker said he expected it could go into effect as early as March 28 if it gets approved. He said they are still hammering out exactly how the fee will be structured.

CruzinPort is free and open to anyone, but participants in the car show pay a $10 registration fee if they want to be judged. The proceeds, Harold said, all go back into the show.

“We couldn’t see how we could do this without raising the registration to $15, which I felt, was more than the car show market could bear,” Harold and Sheri wrote in the email.

Luckily for them, “a very generous cruiser” came forward and agreed to pay not only the city fee, but the insurance for the entire season, which goes May through September. Harold said the donor wanted to remain anonymous but was a resident of Port Jervis.

“We’re back on track and look forward to another wonderful season of Good Friends, New Acquaintances, Great Food and Awesome Rides,” the couple wrote to their fans in the announcement.

When the mayor first announced that the Butlers were not interested in hosting CruzinPort this year, he also put out a call for anyone who would be.

“For three years I have worked with, attended, as well as sponsored a trophy with my own money,” he wrote on Facebook. “We welcome Cruzin Port and welcome anyone that would like to run it.”

While it seemed that CruzinPort was hanging in the balance, he said he was approached by “several” people who were interested.

Shortly after that came the announcement that the Butlers were hosting it again, but it shows how popular the car show has become, even if somewhat controversial at times.

The car show started in 2009 when Harold, a resident of Sparrowbush, wanted to bring people to the city on one of the quietest nights of the week—Tuesday. He said he did it with local businesses in mind, and encourages cruisers to “honor the local merchants by shopping in their establishments,” the CruzinPort website states.

“It’s overgrown. My town is now too small for my car show,” said Harold, who grew up in Port Jervis.

People come from as far as Wilkes-Barre, Pennsylvania, about 75 miles west, and Wantage in central New Jersey 11 or so miles southeast, Harold said.

And part of the attraction is that it is in downtown Port Jervis. They liken it to “American Graffiti,” a 1973 film about a night in the life of some high school graduates in the 1960s “cruzin” around in their cars.

The other thing that makes it unique is the variety. They have antique cars, motorcycles, new cars, and trucks all in the same show, and last year they gave away 31 prizes, ranging from the Best Corvette to Mayor’s Choice to Best Custom Truck.

Despite the popularity of the event and support from the community, it has not always been smooth sailing for CruzinPort.

Eleven people showed up for a police committee meeting in December 2013, according to the minutes, to discuss issues the car show was creating in the downtown.

They identified traffic congestion, people setting up lawn chairs in advance to reserve a spot, and illegal parking as some of the issues that needed to be addressed.

Fourth ward Councilman Stan Siegel said they have been addressed, and it was mostly one local business owner who had complaints; most people were very supportive.

He said he is glad to see CruzinPort coming back this year and even hopes to participate this year.

“It fits in with some of the other activities we’re trying to bring to town,” he said in a phone interview. “And even has me in a position to where I’m looking for a ’60s car.”

The show happens on the first Tuesday of the month starting in May with the rain date on the second Tuesday.