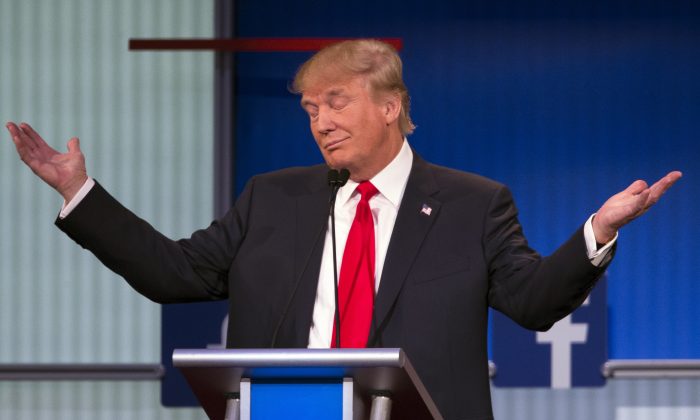 Donald Trump has released a statement clarifying his “blood” comments about Fox News commentator Megyn Kelly after the presidential candidate was disinvited from an event over the comments.

Trump and Kelly got into some heated moments during the Republican debate on August 6, and Trump followed up by saying the following on CNN the day after the debate.

The questions included one where she asked him how he would answer charges that he’s part of “the war on women.”

“You have called women you don’t like ‘fat pigs’, ‘dogs’, ‘slobs’, and ‘disgusting animals,'” Kelly said. “Your Twitter account has several disparaging comments about women’s looks. You once told a contestant on ‘Celebrity Apprentice’ it would be a pretty picture to see her on her knees.”

Trump said he didn’t remember many of those comments, and said the ones he does remember were directed at Rosie O’Donnell.

After Trump’s “blood” comments, he was disinvited from a RedState gathering of conservatives in Atlanta on Saturday.

“Mr. Trump made Megyn Kelly look really bad — she was a mess with her anger and totally caught off guard. Mr. Trump said ‘blood was coming out of her eyes and whatever’ meaning nose, but wanted to move on to more important topics. Only a deviant would think anything else,” Trump’s campaign said.

“Also, not only is Erick a total loser, he has a history of supporting establishment losers in failed campaigns so it is an honor to be uninvited from his event,” the Trump team continued. “Mr. Trump is an outsider and does not fit his agenda.”

It further added that “”Many of the 900 people that wanted to hear Mr. Trump speak tonight have been calling and emailing — they are very angry at Erickson and the others that are trying to be so politically correct. To them Mr. Trump says, ‘We will catch you at another time soon.”

Erickson responded to the statement by saying that it’s the “beginning of the end” of Trump’s campaign.

“I think it’s probably more pathetic to interpret a reporters’ tough question as the product of hormones,” he said. “To suggest that the person who’s asking him the question has a hormone problem, doesn’t suggest that he’s tough, it suggests that he’s a bully.”