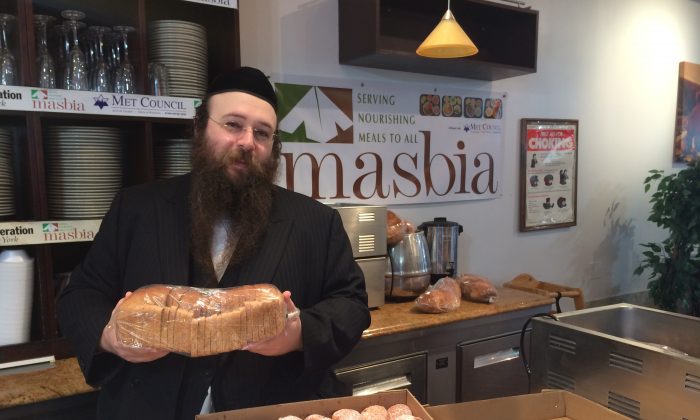 NYC food kitchen Masbia is serving triple as many people as three months ago, largely a result of federal cuts to SNAP.
New York

After Cuts to Food Stamps, Demand for Soup Kitchens Swells

Masbia in Flatbush and its other two locations are filling a need that is only getting bigger this year.

As of November 1, the food stamp budget was cut by 6%, after a short-term boost from the 2009 stimulus bill expired.

“The food stamps actually weren’t lasting people till the end of the month the way it was, and now with the claw-back we’re actually seeing them earlier in the month needing more,” said Beau Heyen, Masbia’s chief development officer. “So we’re watching people come here a little more desperate.”

More funding cuts could be just around the corner. Members of Congress left for their Thanksgiving break without reaching an agreement on the Farm Bill, which includes the SNAP program. Congressional Republicans want to cut funding for food stamps by $40 billion over five years.

Since the 2008 economic crisis, the number of Americans receiving food stamps has nearly doubled. Now, more than one out of every seven Americans is on some type of federal food aid program.

The hardships will be faced by families nationwide, as well as here in Flatbush. Masbia employee Joseph Steinberger said one customer recently walked more than four miles each way to pick up a bag of groceries from Masbia. She couldn’t afford the bus fare.

The holidays are an especially rough time for many families, as financial pressure peaks.

“Right as Hanukkah and Thanksgiving start—that’s when the cut will be felt in people’s budget,” said Rapaport, Masbia’s founder. “We’re going to be there right when they need it most.”

Masbia is named for the Hebrew word meaning “to satiate.” It serves dinner five nights a week, and gives out grocery bags once a week, to a wide ethnic and religious mix of customers.

This week, Masbia is preparing 1,500 special “Thanksgivikkuh” bags. They will include kosher turkey or chicken, as well as potatoes and cholent, a type of Jewish stew.

Masbia, like other food kitchens in New York, receives food from the New York City Food Bank and City Harvest. They also get a small amount of funding from the local, state, and federal governments. But most of their budget comes from cash or in-kind donations from private donors.

And as the federal food aid program is reduced, the need food kitchens like Masbia will only increase.

“We serve dinner because we can only afford to serve dinner,” said Rapaport. “With the help of good people, maybe one day we’ll be open 24/7.”