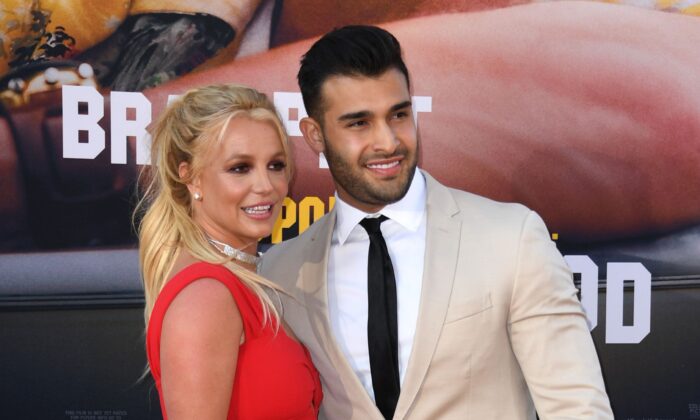 Singer Britney Spears (L) and boyfriend Sam Asghari arrive for the premiere of Sony Pictures' "Once Upon a Time... in Hollywood" at the TCL Chinese Theatre in Hollywood, Calif., on July 22, 2019. (Valerie Macon/AFP via Getty Images)
Entertainment

LOS ANGELES—Britney Spears has secured a restraining order against her ex-husband, Jason Alexander, after he attempted to crash her wedding in Thousand Oaks last week.

A judge ruled during an arraignment Monday that Alexander can’t contact or disturb his ex-wife for at least the next three years. He pleaded not guilty and was held on $100,000 bail.

On Thursday, Alexander showed up to Spears’ wedding unannounced and uninvited while streaming live on Instagram. Security apprehended him after a quick struggle, with police saying he was armed with a knife.

Alexander was arrested that same day on suspicion of three misdemeanor charges: battery, trespassing, and refusing to leave private property. He was also booked on an outstanding warrant for felony grand theft embezzlement and receiving stolen property, connected to an unrelated incident in North Carolina in which a woman says he stole her $2,000 bracelet.

Spears and Alexander were childhood friends and had an impromptu wedding in Las Vegas in 2004. Only 55 hours later, the marriage was annulled, however, with the singer later telling E! News she was being “silly and rebellious.”

During Monday’s arraignment at the Ventura County Courthouse, Judge Catherine Voelker ruled Alexander cannot contact Spears or come within 100 yards of her or her husband for three years. Judge Voelker also added a felony stalking charge, setting bail at $100,000.

Alexander was released on bail and assigned a Ventura county probation officer. As part of the restraining order, he must consent to a search of himself, his home or his car, at any time for any reason, according to docket information reviewed by The Times.

Meanwhile, Spears is moving on with her new husband, Sam Asghari, and has packed her Instagram with wedding photos and words of affirmation even as TMZ reported that the singer and the model-actor signed an “ironclad” prenup ahead of the wedding, protecting her estimated $60-million fortune. Spears and Asghari dated for six years prior to the wedding.

“It was the most spectacular day,” Spears wrote Saturday on Instagram. “I was so nervous all morning but then at 2:00 pm it finally hit me … we’re getting married!

“I had a panic attack and then got it together,” she continued. “The crew who created our home into literally a dream castle were fantastic! The ceremony was a dream and the party was even better!”