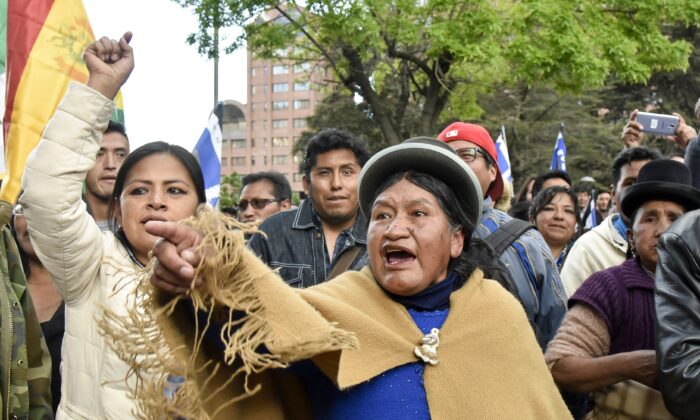 Supporters of Bolivia's president and candidate Evo Morales demonstrate against the main opposition candidate, former president (2003-2005) Carlos Mesa, as supporters of both groups gather outside the hotel where the Supreme Electoral Tribunal has its headquarters to count the election votes, in La Paz, on October 21, 2019. (AIZAR RALDES/AFP via Getty Images)
Americas

Unrest in Bolivia is spiking sharply as Evo Morales, Bolivia’s president and leader of the political party Movement Toward Socialism (MAS), has threatened to “fence in” cities that oppose him.

The threat is an attempt to clamp down on large, spreading protests against him after he declared himself president for yet another term, notwithstanding widespread allegations of voter fraud that left international observers objecting and domestic opposition furious.

Domestic opposition, in addition to alleging massive voter fraud, said the vote was fundamentally illegitimate as Morales was barred from running based on term limits set in Bolivia’s Constitution.

Morales had held a referendum on Feb. 21, 2016, to change this constitutional provision, but it was voted down by a majority. Ever since, rallies against Morales feature signs stating “21F, Bolivia said no!”

Some supporters of Morales have shrugged these problems off as technicalities. They argue that Bolivia has long been unstable, and Morales has brought relative stability while raising the standard of living, fighting for the poor, and confronting the rich oppressors based out of eastern Bolivia.

The opposition argues that Morales is turning Bolivia into another Venezuela and selling Bolivia out to China. In addition, he has largely ignored the fires ravaging Bolivia’s rainforests, which are causing an environmental disaster.

Before becoming president, Morales had a long history in the coca industry, the leaf being used widely in Bolivia in its raw form, to chew on, as well as in the manufacture of cocaine. His vice president is Alvaro Garcia Linera, who self-identifies as a “total communist” and says his decision-making is based on Vladimir Lenin’s life.

Roadblocks Set Up by Opposition

After Morales claimed victory for himself, the opposition began striking and setting up roadblocks to pressure the government.

Supporters of Morales responded by physically confronting the opposition. Dozens of people across Bolivia were injured, some seriously, following violent political action in recent days.

Morales loyalists are escalating the situation further by telling the opposition to accept Morales’s continued rule. Otherwise, they say they will march thousands of miners with dynamite through the city and end the protests by force, according to media reports. They have additionally threatened to cut off the water supply to La Paz unless the protests halt.

While roadblocking is a common political tactic in Bolivia, it normally has a certain etiquette, whereby emergency vehicles are let through. Roadblocks also tend to happen sporadically for relatively short durations. If Morales implements the threat to block food and water from getting to the opposition, it would mark an unprecedented turn of events.

The situation for Bolivians is tense, volatile, and expected to get worse.

Morales, rather than searching for a compromise or giving the opposition a face-saving way out, is belittling and taunting the opposition, jeering that he will teach a rogue band of protesters how to respect him.

The threat to cut off water to La Paz would be particularly surprising as La Paz has long been a stronghold for Morales.

According to media reports, dissent against Morales has expanded outward from Santa Cruz into La Paz. These two cities, long-time opponents of each other, now appear somewhat united in their opposition to Morales. There are photos and videos circulating of a protest that took place in La Paz with what appears to be tens of thousands of people.

This follows protests in Santa Cruz shortly before the vote, where reportedly more than 1 million people were in attendance, a staggering number given that Santa Cruz only has a population of between 3 and 4 million. They chanted in favor of democracy and federalism, and against Morales. The government responded by buzzing the rally with disruptive low-flying, noisy helicopters.

Arguably even more problematic for the opposition is the sponsorship Morales has from international entities.

His administration was aided for a long time by money from Venezuela. Though that money has run out, he reportedly still has backing from Cuban agents.

He also has a tight relationship with Vladimir Putin, having visited Moscow numerous times where he signed energy and nuclear deals. Russian agents ran propaganda campaigns to bolster his campaign.

China also has a large interest in the outcome. Morales has taken out billions of dollars in loans from China.

While officials from the United States and Brazil have made statements of concern regarding the situation, there has been little international response beyond that.