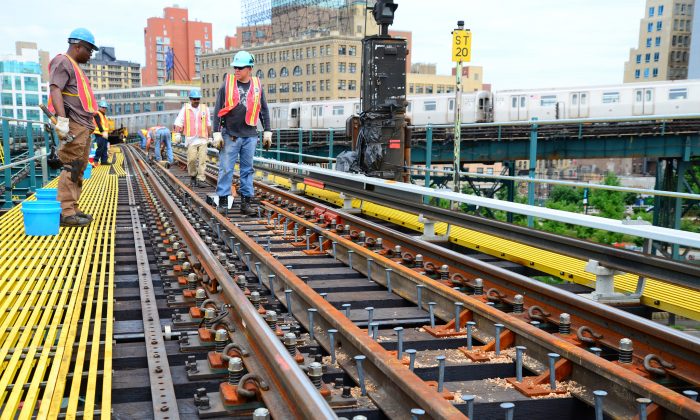 G train service is returning to Brooklyn and Queens next week, which means riders will lose the free transfer to the J and M lines they have gotten used to in the last five weeks.

“This free transfer is a cheap, convenient way to better connect G train riders to the rest of the city. Keeping the transfer in place could help thousands of riders every day, especially low-income riders who rely on pay-per-ride Metrocards,” stated Rebecca Bailin, an organizer at advocacy group Riders Alliance. “It’s not just an easy fix; it’s also good policy.”

On Wednesday, elected officials rallied with transit riders to urge the Metropolitan Transportation Authority to keep this free transfer for G train riders when the subway service is back. Riders Alliance has started a petition to keep the free transfers.

Over the last five weeks, service had been down between Court Sq. in Long Island City and Nassau Avenue in Brooklyn to fix damage caused by Sandy. During that period, free shuttle buses ferried riders back and forth and gave them a free transfer to the J and M lines at the Lorimer Street station.

According to a review requested by State Senators Daniel Squadron and Martin Dilan, 2,300 riders walked to transfer between  the G train at Broadway and J/M lines at Lorimer Street daily in 2013. The MTA had agreed on the free transfer during the five weeks of G train downtime after a town hall hosted by Squadron and Riders Alliance.

“One silver lining to the G train outage has been the free transfer to the J/M line. Making it permanent is an affordable way to improve service and respond to riders,” Squadron stated.

According to MTA estimates, the transfers cost $770,000 annually.

“The expansion of the transportation system in North Brooklyn has been slowly but surely happening as a result of the area’s population growth. Yet, the G train is the only subway that fully serves Brooklyn,” stated State Assembly Member Joseph Lentol. “The MTA must realize that to access southern Manhattan and eastern Brooklyn the J/M train serve as a great alternative. However, riders of these lines are currently forced to make an out-of-station transfer between the G and J/M that is costly for those without unlimited cards.”

Riders who take the B43 bus to the J train transfer for free, said council member Antonio Reynoso, so riders walking to the train from the G line should not be charged twice either.  “This charge is a particular burden for low-income people who cannot afford monthly Metrocards,” Reynoso stated.