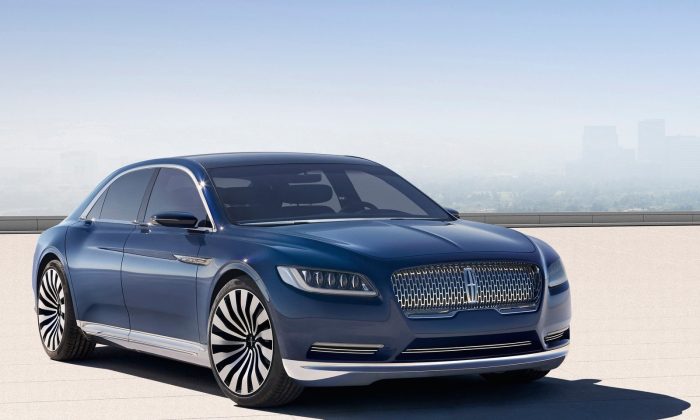 After 13 Year Hiatus, Lincoln Is Bringing Back the Continental Sedan

DEARBORN, Mich. – Elvis Presley had one; so did Clark Gable. It was even the sedan of presidents. Then the name vanished amid an invasion of newer luxury cars from Europe and Asia.

Now, the Lincoln Continental is back.

Thirteen years after the last Continental rolled off the assembly line, Ford Motor Co. is resurrecting its storied nameplate. The new Continental debuts in concept form at this week’s New York auto show. The production version of the full-size sedan goes on sale next year.

After more than a decade of toying with alphabetical names like LS and MKS to be more like its foreign rivals, Ford’s 98-year-old Lincoln brand is embracing its heritage. It’s a measure of the growing confidence at Lincoln, which is finally turning around a decades-long sales decline. And it’s a nod to the importance of China, where customers know the Continental name and appreciate brands with a rich history.

Ford CEO Mark Fields says the Continental always represented the best of Lincoln. Resurrecting it sets higher expectations, both within the company and outside of it.

“When we get a chance to work on an iconic nameplate like that, it’s a mixture of pride and a mixture of fear, because when you put that name out there, it’s got to deliver,” Fields told The Associated Press in a recent interview.

The concept is a technology showcase.

The Continental was born in 1938, when Henry Ford’s son Edsel commissioned a convertible he could use on his spring vacation. Thrilled by the reception he got as he drove the elegant sedan around Palm Beach, Edsel made the Continental part of Lincoln’s lineup.

The Continental soon became the pinnacle of American luxury. Warner Brothers gave Elizabeth Taylor a 1956 Continental with a custom paint color to match her eyes. A darker historical note: John F. Kennedy was riding in the back of a 1961 Continental convertible when he was assassinated in Dallas.

Continental sales peaked in 1990 at 62,732. But after that, Lincoln’s sales began slipping.

Ford had acquired other luxury brands such as Jaguar and Volvo. Lincoln’s designs got dull and failed to stand out from lower-priced Fords. The Continental was also squeezed by competition from the midsize Lincoln LS, which debuted in 2000, and the bigger Town Car.

Ford also underestimated the threat posed by German rivals, who were expanding their lineups, and newer Japanese luxury brands. By 2000, Lexus was the top-selling luxury brand in the U.S.; last year, BMW was.

To make its way back, Lincoln isn’t trying to be sporty like BMW or showy like Cadillac. Instead, Fields says, it wants to give drivers an experience that is elegant and serene.

“We want folks to get into our vehicles and, for lack of a better term, chill,” Fields said.

The strategy appears to be working. Lincoln’s U.S. sales rose 16 percent last year, making it one of the fastest-growing luxury brands in the market. The midsize MKZ was the brand’s top seller.

Full-size sedans like the Continental are a tough sell in the U.S., where buyers tend to prefer midsize sedans or SUVs. U.S. sales of Lincoln’s current full-size sedan, the MKS, fell 24 percent last year.

But globally, the segment is growing, Fields says. Ford has high hopes for the Lincoln brand in China, where it’s opening dazzling new dealerships complete with waterfalls. Ford began selling Lincolns in China late last year, and plans to open more than 20 dealerships there this year.

The concept car unveiled in New York is painted a deep Prussian blue, an homage to Continentals of the 1950s and 1960s. But there are few other references to its history.

Lincoln’s split-wing grille, a feature that dates to the 1940s, has been replaced by a tight, rectangular mesh grille, its shiny chrome patterned with tiny versions of Lincoln’s rectangular logo. The sides are smooth; even the door handles are hidden within a narrow strip of chrome at the beltline.

The concept is a technology showcase. The driver’s seat has a patented split cushion, so if the driver holds one leg out further than another, it will support each leg separately. The moonroof glass turns opaque with the touch of a button. Another button automatically moves the front passenger seat forward and fully reclines the rear passenger seat. That’s another nod to China, where luxury car owners often have their own drivers.

Under the hood is a 3 L V6 EcoBoost engine that’s unique to Lincoln. Ford isn’t yet revealing more details, like whether the car is front- or rear-wheel drive. The Continental switched to a front-wheel-drive sedan in the 1980s, but many of its current competitors like the Infiniti Q70, Mercedes Benz S-Class and Lexus LS are rear-wheel drive.

The Continental is expected to replace the seven-year-old MKS, which currently sits atop Lincoln’s car lineup.