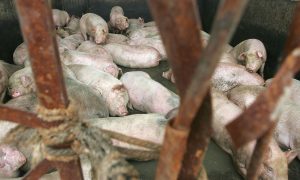 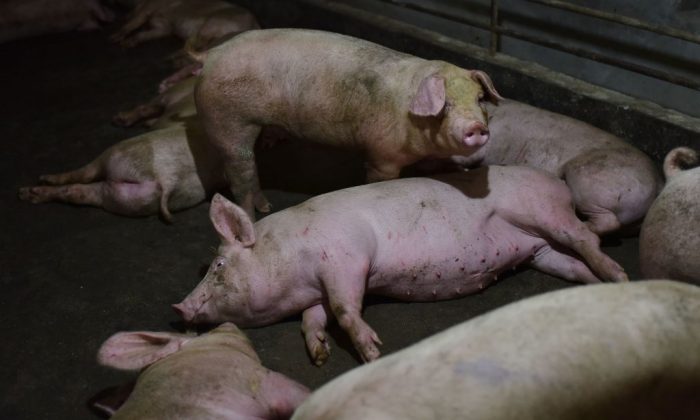 Pigs rest in a pen at a pig farm in Yiyang County, in central China's Henan Province, on Aug. 10, 2018.(Greg Baker/AFP/Getty Images)
China

Pork prices have sky-rocketed in China over the last six weeks as the impact of African Swine Fever (ASF) continues to devastate the country’s pig farms. China’s meat imports, including pork, reached a new high in May. In anticipation of further price hikes, China’s A-share pork concept sector also experienced a significant increase in recent months.

According to the latest data from China’s Ministry of Agriculture and Rural Affairs, in June, the average ex-works price of lean pork in 16 provinces was 20.26 yuan ($2.94) per kilogram, up 43.7 percent year-on-year. The average price for pork on the wholesale market increased 2.6 percent in just four days from June 20 to June 24, reaching 22.63 yuan ($3.29) per kilogram.

Behind the rise in pork prices is the declining live pig supply as a result of ASF that has spread all over China.

African swine fever is harmless to humans but fatal and highly contagious to pigs. The first ASF case in China was detected in Liaoning Province on Aug. 3, 2018. By April 19 of this year, just 8 months later, it had spread to all 31 provinces, regions, and municipalities.

However, Xu Qingsong, an expert in the pig breeding industry, reported a different set of data during a recent interview with Jiemian Media Platform, a Shanghai-based financial news media. Based on data collected by Xu and his colleagues, he concluded that ASF “has caused the number of farmed pigs to drop by 47 percent year-on-year, and caused the number of sows to drop by 34 percent year-on-year.”

China imported a record volume of meat in May to control rising pork prices.

Feng Yonghui, chief analyst of China Pig Alert Network, told the Beijing Business Daily that the price of live pigs may set a new record high in the third quarter this year. According to Feng, the key factor affecting pork prices is the restoration of production capacity, which in turn relies on the development of an ASF vaccine.

But even if a vaccine can be developed by the end of this year, it will take a minimum of one year to restore production capacity.

The forecast of rising pork prices has also pushed pork concept stocks up dramatically. As of June 24, the A-share pork concept sector has seen a total increase of 73.71 percent this year. Some of the best performers include Zhengbang Breeding Corporation, with 248 percent increase in stock value this year, and Muyuan Farming, which had an increase of 109 percent in the past six months.