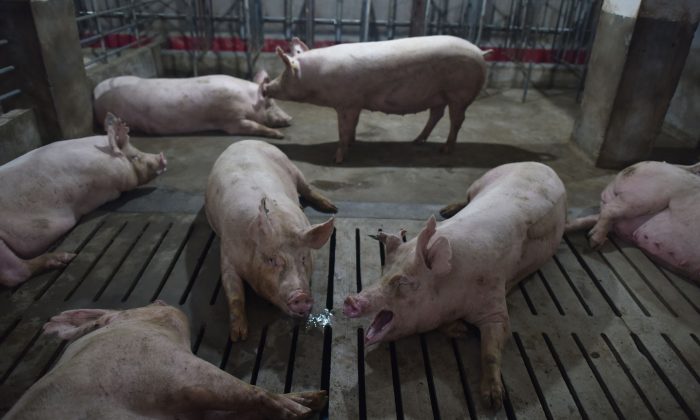 African swine fever (ASF) has now spread across China to the southwestern reaches of the country, officials say.

Two new outbreaks, announced on Oct. 21, occurred at farms in Zhenxiong County, in Yunnan Province. All 545 of the pigs reported to have been infected have died, including 298 at a farm in Niuchang Town, and 247 at a Muxiang Town farm.

Yunnan is the 11th region in China to report an outbreak of the virus, since the first case of ASF was detected in northeastern China in early August. The others are Inner Mongolia, Liaoning, Heilongjiang, Henan, Jiangsu, Anhui, Zhejiang, Jilin, Shanxi, and Tianjin City (a directly governed municipality).

ASF is a highly contagious disease affecting pigs and wild boars; there is no cure or vaccine. However, the disease isn’t known to be harmful to humans, even if infected pork products are consumed.

Since the trade dispute between China and the United States began, one of the countermeasures China enacted was retaliatory tariffs on U.S. pork. While China decided to buy pork from other countries instead to improve supply, the outbreak of ASF has proved detrimental to domestic pork production.

Foreign pork imports may have caused the ASF to spread to China in the first place. China’s alternative sources for pork include Russia, where the ASF virus has plagued the local pig population for the past decade, according to the website Pig Progress, which is run by Proagrica Media, an agriculture market-research firm. Russia has culled more than 2 million pigs since the initial ASF outbreak in Russia in 2007.

Before the first ASF case occurred in August, China had stopped importing pork from the United States. Instead, it imported 240,000 tons of frozen pork from Russia during the month of August, according to China’s state media reports. After the outbreak of ASF, that news was quickly censored by the Chinese regime, according to a Radio Free Asia (RFA) report published on Oct. 17.

In August, scientists at the U.N. Food and Agriculture Organization had told scientific journal Science that the illness likely arrived in China via imported pork products, and that a genetic analysis indicated the virus found in China is closely related to a strain circulating in Russia.

China’s national Animal Health and Epidemiology Center confirmed after DNA sequencing that the ASF virus found in China was indeed the same strain as Russia’s, according to the RFA.

Chinese authorities have repeatedly tried to assure the public that the outbreak has been dealt with. However, different regions have continued to report outbreaks of the ASF.

Ms. Xu, an ASF expert in China who participated in ASF prevention and disease control told RFA in the same report that whether in terms of management or biotechnology capacity, China is unable to stop the spread of the ASF virus.

Chinese authorities have repeatedly published news stressing that infected pork in China is still edible because the virus can be killed by cooking for 30 minutes at high temperature. However, Xu said that though there haven’t been any reports of human infection, it may not mean infected pork is safe. As with the avian flu virus, the ASF virus may mutate, she told RFA.

China is also severely restricting testing of the virus. Only the Animal Health and Epidemiology Center is allowed to conduct tests; even provincial-level disease control laboratories can only send samples, Xu said.

Ren Ruihong, a former senior executive at the Red Cross Society of China, told RFA that pig farmers may also be concealing the spread of the disease due to the pressures of making a living—which is likely to aggravate the spread of the virus.