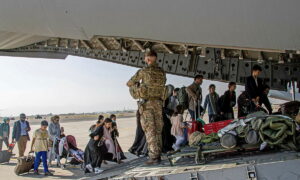 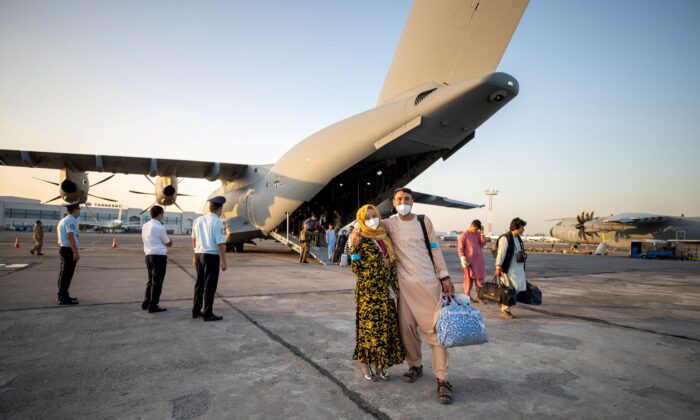 Evacuees from Afghanistan as they arrive in an Airbus A400 transport aircraft of the German Air Force Luftwaffe in Tashkent, Uzbekistan, on Aug. 17, 2021. (Marc Tessensohn/Twitter @Bw_Einsatz/Handout via Reuters)
Europe

Frankfurt—Afghans who arrived in Germany on Wednesday described chaotic and terrifying scenes at Kabul airport before they were evacuated to safety and said they feared for the lives of loved ones they left behind.

Speaking shortly after landing in Frankfurt on a flight from Tashkent, men, women, and children said they were part of a lucky few evacuated by NATO armies after the country fell to the Taliban with astonishing speed.

“We had to force our way through and my little son fell over and we were scared but we made it,” said a woman, speaking in German.

“Then an American guy showed goodwill and realized we were totally exhausted. He took the passports and said I need to check if this is authentic. Then he said ‘all good, you may go in’. Others behind cried and lay on the ground. It was scary.”

She, her son and husband, was on the first of several flights organized by Germany to rescue Afghans who are at risk from Taliban insurgents because they had worked for NATO armies or western-funded charitable organizations.

A veiled woman wiped away tears, another spoke on her mobile phone and men sobbed as they embraced family members and German friends who had come to welcome them.

None of the few who spoke to reporters mentioned their names or what they had done in Afghanistan, where many fear retaliation against family members they may never see again.

“Everyone wants out,” said the woman’s husband, also speaking in German and carrying their son. “Every day is worse than the day before. We saved ourselves but we couldn’t rescue our families.”

Chancellor Angela Merkel told a meeting of her Christian Democrats on Monday that Germany may need to grant asylum to some 10,000 Afghans who worked with the German army and development agencies as well as human rights activists and lawyers.

Opposition parties in Germany have criticized the government for failing to predict the fall of Kabul to the Taliban and for what they say is a failed military adventure since 2001 that cost billions of euros and the lives of 59 German soldiers.

The Alternative for Germany (AfD) party has urged the government to institute a moratorium on asylum applications and look after Afghan civilians in neighboring countries like Pakistan.

At Frankfurt airport, a young Afghan man wearing a red and white jacket spoke of his joy to be in Germany.

“The anxiety was huge because my whole family is still there,” he said. “It wasn’t easy to leave them behind and come here. A part of me is still there. I’m very emotional but otherwise, I’m well, thank God.”

A little girl standing with her parents said in German: “When the soldiers opened fire it wasn’t good because everyone got scared and started screaming.”