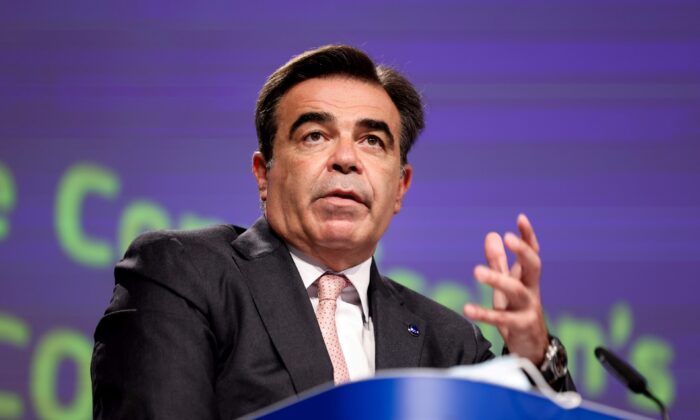 European Commission Vice-President Margaritis Schinas speaks during a news conference on the safe resumption of activities in the cultural and creative sectors, at the EU headquarters in Brussels, on June 29, 2021. (Kenzo Tribouillard/Pool via Reuters)
Europe

Afghanistan Could Be Catalyst for Common EU Migration Policy: Commissioner

ZURICH—Events in Afghanistan could be a catalyst for the European Union to forge a common migration policy, European Commissioner Margaritis Schinas said in a newspaper interview.

EU states are concerned that the Taliban takeover could trigger a replay of the crisis of 2015/16, when the arrival of more than a million migrants, predominantly from the Middle East, stretched security and welfare systems and fueled support for far-right groups.

“It is true that we are now in a major crisis, but the EU did not cause the situation, yet we are once again called upon to be part of a solution,” the Greek commissioner, whose brief includes migration policy, told Austrian daily Wiener Zeitung.

While not seeing a migration crisis, he said he wanted to “avoid a reflex that takes us back to the crisis year 2015 before it is even clear how the situation will develop.”

The UN’s refugee agency (UNHCR) has said up to 500,000 Afghans could flee their homeland by year-end.

“Therefore, I see now as the moment to agree on a common European migration and asylum policy, as we proposed in the EU Commission in September,” he said.

Migration has undermined the unity of the 27-member EU, with proposals to legally oblige all states to host their share of refugees rejected by several former Communist Bloc states as well as Austria.

Schinas said differences remained among members, with strong opposition to a deal among “the populists on the right and left fringes,” but he saw a window for one after French presidential elections in May 2022, by when there would also be a new government in Germany.