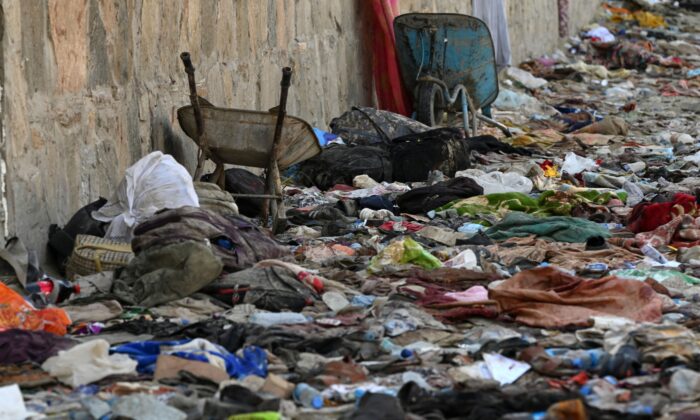 Backpacks and belongings of Afghan people who were waiting to be evacuated are seen at the site of the Aug. 26 twin suicide bombs, which killed scores of people including 13 U.S. troops, at Kabul airport in Afghanistan on Aug. 27, 2021. (Wakil Kohsar/AFP via Getty Images)
Viewpoints

Afghanistan Brings Disaster, but No Responsibility Is Taken

Two weeks ago in this space, I wrote about the foolishness of a political leader like President Joe Biden who is so ideologically rigid, so thoroughly self-identified with his beliefs about the world that, when those beliefs turn out to be wrong, he can never afford to acknowledge the truth.

This week, Biden provided yet another illustration of this foolishness by an address to the nation, occasioned by what anyone could see was America’s worst military disaster in nearly half a century.

Yet not only did he fail to acknowledge the disaster, he treated it as if it were a triumph.

“Last night in Kabul,” he began, “the United States ended 20 years of war in Afghanistan. The longest war in American history. We completed one of the biggest airlifts in history with more than 120,000 people evacuated to safety. That number is more than double what most experts thought were [sic] possible. No nation, no nation has ever done anything like it in all of history. Only the United States had the capacity and the will and ability to do it, and we did it today.”

Then he continued: “The extraordinary success of this mission was due to the incredible skill, bravery and selfless courage of the United States military and our diplomats and intelligence professionals.”

Even allowing for the fact that he knew he could rely on a sycophantic media to back up or rationalize this patently false claim to “success,” or least decline to notice its falseness, it was a powerful testimony to the capacity for self-delusion of the modern ideologue—both of him who made the claim and those millions who are presumably still willing to support him in that self-delusion.

A few weeks earlier, right around the time that Biden was assuring us that “the likelihood there’s going to be the Taliban overrunning everything and owning the whole country is highly unlikely,” I also wrote of how the chairman of the Joint Chiefs of Staff of the military services, General Mark Milley, had also become a prisoner of ideology, since he appeared to have acquiesced in the hard-line Democratic ideologues’ view of Trump supporters as a threat to national security.

This delusion, presumably shared by other senior officers in the armed forces, was potentially even more dangerous than that of Biden about the Taliban, but it also turned out to have foreshadowed it.

You could tell by the transparently political happy-talk briefing given by General Hank Taylor and Pentagon press secretary John Kirby a week before the curtain fell on the American military presence in Afghanistan. (We still don’t know, as of this writing, how many other Americans were left behind there when the last military transport took off.)

“I’m pleased to report our best departure results since evacuation operations began have happened in the last 24 hours,” burbled General Taylor. “Where 37 US Military aircraft, 32 C-17s, five C-130s departed from Kabul with approximately 12,700 personnel. On top of that, 57 coalition and partner aircraft left Kabul aircraft with 8900 personnel.”

He was speaking before the deaths of 13 American service personnel in the suicide bombing at Kabul Airport on Aug. 26. That tragic event caused General Milley to feel “pain and anger” but no regrets for anything he had done.

No kidding! Don’t look to him to take any responsibility for those 13 deaths, however. “War” was to blame, not he.

In the olden days, losing generals would expect to be relieved of their command—and be thankful they weren’t living in Roman times when they would also have been expected to fall on their sword to atone for the dishonor of losing.

As late as 1757, the British put Admiral Byng up before a firing squad for a relatively trivial loss in the Seven Years’ War. Voltaire responded by saying that it was good to kill an admiral from time to time, “pour encourager les autres”—to instill a bit more intestinal fortitude in the surviving admirals.

Yet apparently in our age of ideology, when no one with the “right” political views can ever be wrong, no American general will even lose his job or his general’s pension over the military debacle in Afghanistan—though a lowly lieutenant colonel, who thought and said publicly that somebody higher up ought to pay a price for the disaster, was relieved of duty and forced to resign his commission.

It shouldn’t be necessary to say it, but someone who can never admit to his mistakes can never learn from them.

That’s presumably why we’ve been making the same mistake in waging our American wars since Korea—the mistake of not realizing that if you’re not winning, you’re losing.

General Douglas MacArthur warned us against this mistake when he was fired by President Harry Truman for believing that he had been put in charge of U.N. Forces in the Korean war to win it, not to create bargaining chips for politicians to trade away in negotiations with the enemy.

“In war,” as General MacArthur put it, “there is no substitute for victory.”

But the lesson of his dismissal for all our generals since, down to General Milley, has been that you can never get in trouble, no matter how badly you screw up, for agreeing with the civilian leadership, only for disagreeing, never for being too cautious or complacent, only for being too bold.

Only, that is, for wanting to win. For it is boldness that wins wars. Not caution. Not complacency.

With leaders who can never admit they were wrong, we can expect to do a lot more losing.