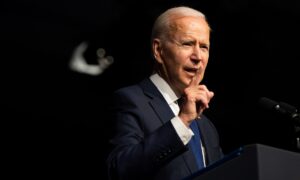 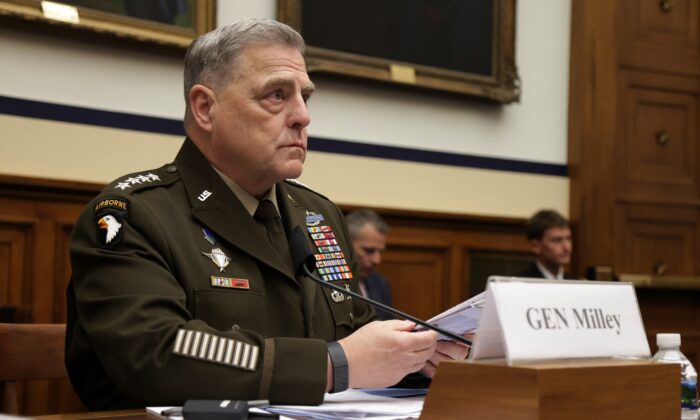 Chairman of the Joint Chiefs of Staff Gen. Mark Milley testifies during a hearing before the House Committee on Armed Services at Rayburn House Office Building in Washington on June 23, 2021. (Alex Wong/Getty Images)
Viewpoints

The Left’s Loyalty Test, and the Coming Enforcement of It

So now we know what it was all about. The only question remaining is how far back does it go, this media campaign, now apparently on the brink of success, on behalf of the progressive project to bring one-party, totalitarian government to America?

It certainly antedates the Trump administration which, nevertheless, gave progressives their biggest boost so far—in a negative way, of course. I think it even preceded the George W. Bush administration when the essential first step of redefining the word “lie” in the public mind was taken with the cooperation (not to say connivance) of academic linguists and lexicographers.

Of course President Bush hadn’t lied at all, not in the sense that people had always understood the word up until then. At worst, he’d made a mistake about weapons of mass destruction in Iraq. He really believed they were there. So did the intelligence services of all the Western nations. There was no intention to deceive. How could there have been when the deception was bound to come to light by the very action it was meant to justify?

But lo and behold, before anyone knew it, several major dictionaries were found already to have redefined the word “lie” to include mere mistakes.

So maybe the progressive campaign goes back to the first academic apostles of “permissive” grammar, whose early successes in the 1950s and 1960s—especially with Webster’s Third New International Dictionary of 1961—gave “prescriptive” grammar and its rules of correctness a bad name from which they have never recovered.

My own first inklings of the true nature of the progressive project came during the Clinton administration, when I attended a dinner being given by a center-right think tank for someone who was then something of a bigwig at The New York Times and who came among the conservative and old-fashioned liberal think-tankers like an ambassador from an alien civilization.

I can’t be more specific about this event because it was officially off the record, but I remember marveling at the impertinence of the guest speaker in telling the rest of us with vast condescension that our quaint conservative politics were all very well, but we must be very careful—very careful indeed—not to trespass the boundaries of what The New York Times regarded as decent opinion. What would happen if we didn’t was left to our imaginations.

He didn’t reveal then that those boundaries were to be drawn ever tighter over the years, but he did hint, without being more specific himself, that some things would not be tolerated by the cultural czars who were even then beginning to assume the authority since exercised by what has lately come to be known as cancel culture.

But the moment of real revelation for me—the moment when all the pieces of the puzzle came together—happened last month when Gen. Mark Milley, chairman of the Joint Chiefs of Staff, testified before a congressional committee about why he had studied the works of Marx, Lenin, and Mao Zedong and why, having studied them, he now supports the teaching of “critical race theory” to our armed forces.

“I want to understand ‘white rage,’” he told the committee. “I’m white and I want to understand it. So what is it that caused thousands of people to assault this building and try to overturn the Constitution of the United States of America? What caused that? I want to find that out. I want to maintain an open mind here and I do want to analyze it. It’s important that we understand that, because our soldiers, sailors, airmen, Marines, and guardians, they come from the American people. So it is important that the leaders now and in the future do understand it.”

His carefully phrased answer was clearly meant to imply that “what caused that”—that is, the putative attempt on Jan. 6 to “overturn the Constitution”—was the “white rage” he mentioned at the outset.

The reader can hardly be unaware that both white rage and the supposed attempt to overturn the Constitution are Democratic talking points and have nothing to do, in reality, with the events of Jan. 6. The participants in the Capitol breach may have been as mistaken in their motivations as they were in their methods, but they thought they were trying to preserve, and not “overturn,” constitutional government.

Race, I daresay, never entered their heads in this connection, but it has been attributed to them as their motivation on the basis of the previous Democratic talking point, itself based on a bare-faced lie about what Donald Trump had said about the “very fine people” in Charlottesville in 2017, that the former president was a “white supremacist.”

In other words, an opinion has been turned into a dogma, and the dogma, as we can now see, into a loyalty test—so that belief in it can be enforced by the security services and disbelief punished. Thus the left, which is now in the saddle and rides both government and media, seeks to establish in the public mind that opposition to or even disagreement with the party in power is to be regarded as a security threat to the state.

If Tucker Carlson is to be believed, this is already the view of Biden’s National Security Agency.

In any case, it is Milley’s view. His pledge of fealty to the whole Democratic narrative of “insurrection,” therefore, like his acquiescence in the Biden administration’s propaganda effort to teach critical race theory to the armed forces, is as good as an admission that he’s also prepared to allow his troops, suitably purged of subversive elements, of course, to be used as enforcers of the one-party, totalitarian rule that the Democrats would like to see as our future.

It’s ever more obvious that their attempt to federalize election law and remove safeguards against fraud has the same end in view.

Speaking of overturning the Constitution!

For that is now, in retrospect, what 20 years of promiscuous and largely bogus charges of lying against their political opponents were all about. All along, the revolutionary left of the party to which the rest is now in thrall sought to establish themselves as the new constitutionalists and arbiters of that ultimate “truth,” about which there can only be one legitimate opinion.

Milley and presumably other senior officers are now totally on board with this purely partisan truth. How about you? The time for you to proclaim your own loyalty, one way or another, may be running out.