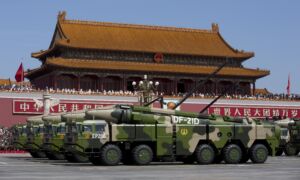 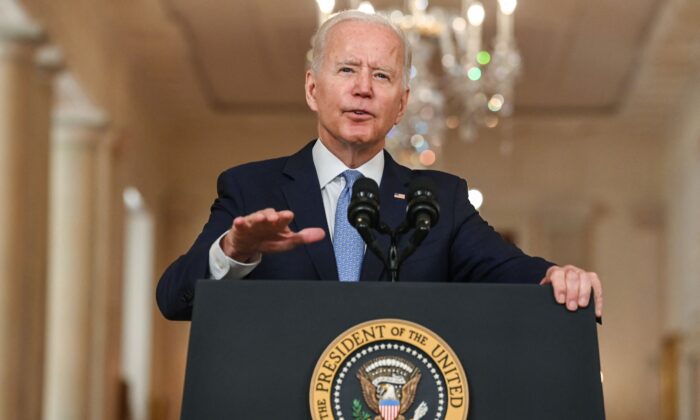 President Joe Biden speaks on ending the war in Afghanistan in the State Dining Room at the White House in Washington on Aug. 31, 2021. (Brendon Smialowski/AFP via Getty Images)
US-China Relations

Afghan Withdrawal Allows US to ‘Shore Up’ Competitiveness to Confront China, Biden Says

President Joe Biden pointed to the U.S. competition with China as a reason for America’s withdrawal from Afghanistan, in a speech on Aug. 31 declaring the end of the 20-year conflict in the war-torn nation.

Before commenting on China, he said future U.S. foreign policy would draw from two lessons in Afghanistan.

“First, we must set missions with clear, achievable goals—not ones we’ll never reach,” Biden said in the State Dining Room at the White House. “And second, we must stay clearly focused on the fundamental national security interest of the United States of America.”

He said the United States will move away from “large-scale troop deployments” aimed at nation-building, and the shift “will make us stronger and more effective and safer at home.”

“It’s about ending an era of major military operations to remake other countries,” he said.

Now, Biden said, the United States should focus on threats coming from Russia and, above all, China.

“The world is changing. We’re engaged in a serious competition with China,” Biden said. “We’re confronted with cyberattacks and nuclear proliferation.

“We have to shore up America’s [competitiveness] to meet these new challenges in the competition for the 21st century.

“And there’s nothing China or Russia would rather have, would want more in this competition than the United States to be bogged down another decade in Afghanistan.”

In recent months, the Chinese regime’s nuclear buildup and cyber activities have been under close scrutiny.

In July, the U.S. Justice Department announced that four Chinese nationals working for China’s Ministry of State Security, the regime’s chief intelligence agency, were charged in a global hacking campaign to steal trade secrets and sensitive information from companies, universities, and government bodies.

Also in July, the National Security Agency, the Cybersecurity and Infrastructure Security Agency, and the FBI issued a joint advisory providing guidelines on how companies and individuals can protect themselves from China’s state-sponsored cyber operations.

Adm. Charles Richard, commander of U.S. Strategic Command, warned about China’s “breathtaking” pace in military modernization during a symposium in August. He specifically expressed concerns about China’s increasing nuclear capabilities, which he argued would allow Beijing to “execute any plausible nuclear employment strategy.”

The Federation of American Scientists and the California-based James Martin Center recently discovered after analyzing satellite images that China is building more than 200 new nuclear silos. The new silos are being built at two separate fields, in China’s far-western region of Xinjiang and neighboring Gansu Province.

Su Tzu-yun, a senior analyst of the Taiwan-based Institute for National Defense and Security Research, previously told The Epoch Times that the U.S. decision to withdraw from Afghanistan was made so that Washington would be able to shift its military resources to the Indo-Pacific to confront China.

As for the future Sino–U.S. relationship, Su said there were signs that the Biden administration only intended to collaborate with the Chinese regime on selective issues—topics that don’t have any direct impact on U.S. national security or interests.

For that reason, Su said the Biden administration has chosen to work with Beijing on climate change.