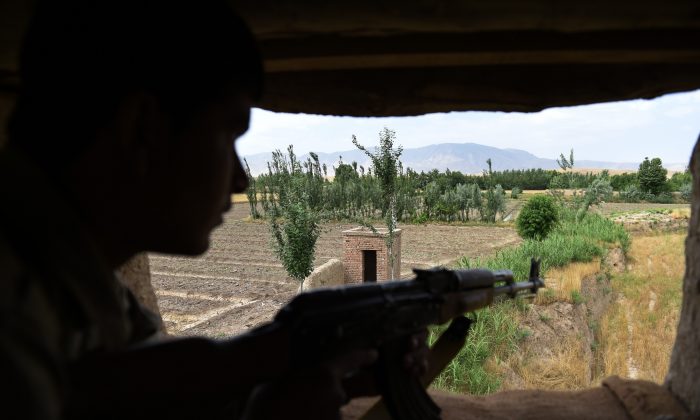 KANDAHAR, Afghanistan—An Afghan policeman turned his weapon on fellow officers as they were sleeping in their quarters near a checkpoint in the country’s south, killing 10, a provincial spokesman said Tuesday.

The Taliban quickly claimed responsibility for the killings, the latest in so-called “insider attacks” involving a fellow soldier or a policeman who either carrying out an attack or help insurgents stage an assault.

The bodies were discovered at a checkpoint in Chinarto district on Tuesday, according to Dost Mohammad Nayab, the spokesman for the governor in Uruzgan province.

The shooter killed his fellow policemen while they were asleep late Monday night, and then fled the scene after stealing all their weapons and ammunition, Nayab said.

“The police units have launched an operation to locate and arrest the shooter,” Nayab added.

Taliban spokesman Qari Yousaf Ahmadi said in a message distributed to the media that the attacker was their man and that he was now with the Taliban.

Insider attacks have been common in Afghanistan, especially in remote areas where the Taliban have a strong presence. Taliban insurgents have been known to wear Afghan police or military uniforms to stage attacks on Afghan or foreign troops. Others have opened fire apparently on their own accord.

Last week, nine policemen were killed after a policeman from the same checkpoint opened fire at them in Dehrawad district, also in Uruzgan province. On the same day, Jan. 18, another policeman killed four other policemen at a checkpoint in Lashkar Gah, the capital of southern Helmand province.

The Taliban have stepped up their attacks on Afghan soldiers and police in recent months. U.S. and NATO forces formally ended their combat mission at the end of 2014, leaving Afghan security forces in charge of public safety in the country.

A statement from the governor’s office said that at least 10 insurgents have been killed and one policeman is wounded in the battles in Dand-e Ghori district.