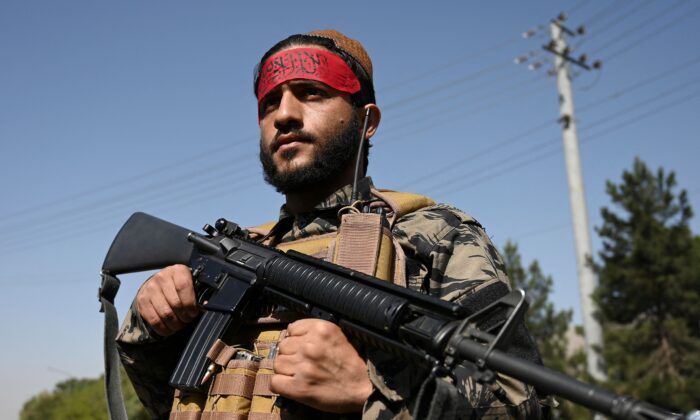 A Taliban fighter stands guard along a road in Kabul on Sept. 9, 2021. (Wakil Kohsar/AFP via Getty Images)
Afghanistan

A statement issued by the Afghan embassy in Geneva on Twitter said that “the Islamic Republic of Afghanistan, which emanates from the free will of the people and epitomizes the vision and aspirations of millions of citizens who made the ultimate sacrifice for the cause of sovereignty, democracy, freedom and independence of their country, condemns the announcement by the Taliban.”

The statement also said that the announcement of the Taliban cabinet will result in “undermining Afghanistan’s political, ethnic, and social diversity, lead to increased tensions, and also undermine the prospect of a comprehensive and lasting peace in the country.”

“Moreover, it goes without saying that the Taliban have once again reaffirmed their blatant disregard and violation of the fundamental rights and important role of Afghan women and other segments of society.”

The statement said that the “so-called Taliban cabinet” is comprised entirely of  individuals who pose a threat to the stability of Afghanistan and condemned them as a national and international security threat.

The Afghan embassy’s statement clearly indicates it is distancing itself from the Taliban government, and will no doubt lead to issues regarding recognition of the new regime for the international community.

Following the Foreign Ministry’s statement, Ambassador Nasir Ahmad Andisha wrote on Twitter, “Now we officially have two states, the Emirate of Talibanistan and the Republic of Afghanistan.”

On Tuesday, the Taliban announced its new government for Afghanistan, challenging claims to rightful government by former Afghan Vice President Amrullah Saleh, who says he is the “legitimate caretaker president” according to the country’s constitution adopted in 2004.

The terrorist group appointed Mullah Mohammad Hassan Akhund as the country’s interim prime minister and co-founder Mullah Abdul Ghani Baradar as the second-in-command, while Mullah Yaqoob, will be the defense minister.

No non-Taliban figures or women were named to any government positions, despite the Taliban previously stating it would form an “inclusive government” as part of the Doha agreement.

The lack of diversity in the newly-formed government has sparked concern from the international community, with the United States previously stating that it would not recognize a Taliban-led government if it wasn’t inclusive.

A spokesperson for the U.S. State Department said in a statement Tuesday that it notes “the announced list of names consists exclusively of individuals who are members of the Taliban or their close associates and no women,” adding that it was “concerned by the affiliations and track records of some of the individuals.”

“We understand that the Taliban has presented this as a caretaker cabinet. However, we will judge the Taliban by its actions, not words,” the spokesperson added.

The UK’s Prime Minister Boris Johnson also echoed U.S. concerns, with a spokesperson noting that the government will “continue to judge the Taliban on their actions.”

“We would want to see, in any situation, a diverse group in leadership which seeks to address the pledges that the Taliban themselves have set out, and that’s not what we have seen,” the spokesperson said.

Meanwhile, European Union spokesperson Peter Stano said the new government “does not look like the inclusive and representative formation in terms of the rich ethnic and religious diversity of Afghanistan we hoped to see and that the Taliban were promising over the past weeks,” in a statement to media outlets.

It comes amid reports that the Taliban has shut down Internet services and telecommunications in Kabul following widespread protests earlier this week.

Thousands of Afghan men and women took to the streets earlier this week to protest against the Taliban and what they characterized as Pakistani intelligence service ISI’s interference in the affairs of the Middle Eastern nation and for allegedly being the guiding hand behind the Taliban’s return to power.

Some of the protesters carried signs reading “ISI stay away.” Others shouted slogans such as “Azadi [freedom or liberty]” and “Death to Pakistan.”

Kabir Haqmal, ex-programs director and spokesperson at the National Security Council of the Islamic Republic of Afghanistan on Thursday wrote on Twitter: “Internet is down in most parts of the capital Kabul. Following the recent protests against [the] Taliban, the group has decided to cut the internet connections. Reports say, Taliban intelligence orders the blockage- they afraid the messages circulation through social media.”

The Epoch Times has been unable to verify the reports of the Internet outages.