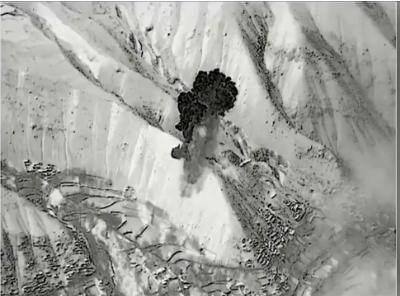 (US Forces-Afghanistan via Storyful)
Middle East

KABUL–Afghanistan forces killed an important ISIS commander in an air strike, one year after he defected from the Taliban and established a new ISIS foothold in the country, security officials said.

He said Mawlavi Habib Ur Rahman has been appointed as his ISIS successor in the north of the country.

The terrorist group, also known as Daesh, established a new foothold in the province last year when Hekmat defected from the Taliban, attracting the attention of U.S. forces.

ISIS claimed responsibility for suicide bombs last month near Shi’ite mosques in Herat and Kabul. Both the Western-backed government in Kabul and the main Islamist insurgent group, the Taliban, fight ISIS.

The terrorist group first appeared in Afghanistan three years ago. As well as its main stronghold in the eastern province of Nangarhar, on the border with Pakistan, its fighters have been active in northern Afghanistan.

While sectarian violence in mainly Sunni Muslim Afghanistan was previously rare, a series of attacks over recent years, many claimed by ISIS, have killed hundreds of Shi’ites.