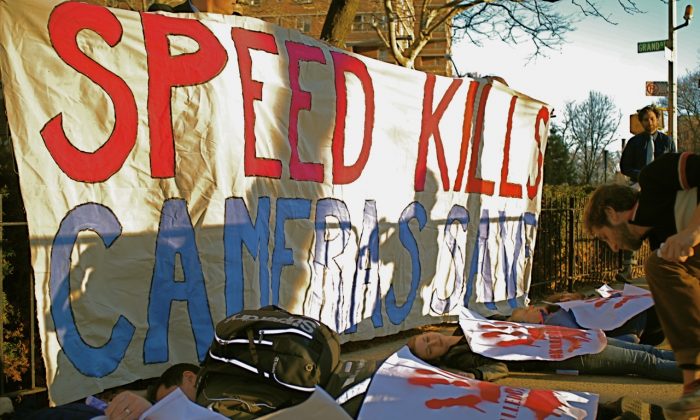 Advocates Call on Albany to Increase Speed Cameras in NYC

NEW YORK—Albany didn’t hear them the first time, so speed camera advocates have taken it to the streets. Forty crime scenes appeared along Grand Street Wednesday night on the Lower East Side as activist group Right of Way spoke out against the slow legislative action upstate for speed cameras.

Right of Way stenciled 40 bodies in the street to represent the lives that would be lost if state legislators do not pass a speed camera bill this year, according to calculations Right of Way made. Speed cameras are currently only allowed in school zones, which take up about two-thirds of the city’s streets. According to city data there are roughly 300 crashes a year, and the cameras reduce crashes by 20 percent, which would save 40 lives.

Larry Schwartz, secretary to Gov. Andrew Cuomo, told WNYC that New York City had submitted its request too late to be included in the budget. Cuomo has said legislation for speed cameras in the city, and in Suffolk and Nassau counties, will be one of the first items the state legislature will address.

The governor’s office did not comment on the form or timing of the city’s request for speed cameras in time for publication.

While the 140 cameras will be a step forward, it’s not the home rule the mayor’s street safety agenda called for. “We would like to have local control,” Trottenberg said Wednesday at a Vision Zero announcement. “That’s what we think is the fair thing.”

The DOT has a map of where speed cameras can be used, and the commissioner said it shows many restrictions. “A lot of areas that are high-crash areas, we can’t use those cameras right now,” Trottenberg said.

Vision Zero is a Swedish street safety initiative to reduce traffic fatalities to zero. In working on New York City’s initiative, Trottenberg said they were able to talk to the project leaders from Sweden.

Unlike New York City, the representatives from Sweden had told Trottenberg “we own our speed,” she said. “We don’t have that power.”

Legally, the city can increase the speed on local streets up to 55 mph with no sign-off from the state, but cannot lower it under 30 mph under current restrictions.

To some degree, the state has been more responsive to the city’s street safety requests with the rollout of the Vision Zero initiative.

The red light camera pilot program, by comparison, has been in effect for around 20 years and the city has less than 200. In the past, increases came every few years when the pilot program needed renewing. State representatives who had constituents asking for red light cameras would realize the city does not have enough, and propose legislation to increase the number.

Since the city-wide initiative, many state representatives of New York City districts have spoken in approval of local control over items like speed limits and traffic cameras.

“I think it is absurd that NYC has to go to Albany to get permission to increase the number of red light or speed cameras,” Assemblyman Jeffrey Dinowitz said. “I certainly don’t think it makes sense for legislators from outside the city to have any say in this whatsoever.”

The push for safe streets has largely been a grassroots effort, and advocates continue to play a large part in both education and pushing for change. “We need all these people to do all of this,” Trottenberg said. “It’s a groundbreaking cultural change.”

Advocates have criticized the limitations Albany has placed on how the city can use the cameras. They can only be installed on a street adjacent to a school entrance, and within a quarter-mile of a school. They are also only in operation on weekdays, during school hours (7 a.m. to 4 p.m.), despite the fact that a lot of speeding occurs after school hours.

The 140 cameras would also give New York City less coverage than Nassau County and Suffolk County, which are able to install a camera in every school zone with the new bill.

The city currently has five of the 20 speed cameras installed. Since the mid-January launch, the cameras have given out 14,500 speeding violations as of Wednesday, according to DOT spokesperson Scott Gastel.