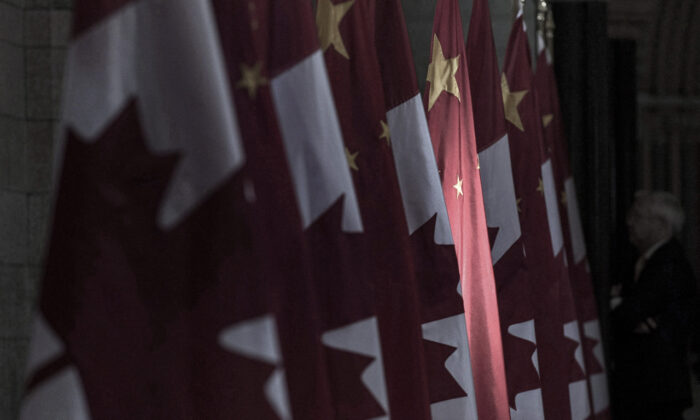 A Chinese flag is seen among Canadian flags on Parliament Hill in Ottawa on Sept. 22, 2016. (The Canadian Press/Adrian Wyld)
Canada

PM’s Greetings to Event Concerning, as Organizer’s Chinese Affiliate Had Aim to ‘Spread the Voice’ of CCP: Advocate

A democracy advocate is warning about the Chinese regime’s covert “cultural infiltration” after multiple Canadian politicians lent support to the opening celebration of a new Chinese library. The Vancouver library is part of a China-based project whose founder had said aims to “spread the voice” of the Chinese Communist Party (CCP).

The new library was unveiled on Sept. 10 during a “Night of the Mid-Autumn Festival” event held at a winery in Richmond, just south of Vancouver. It was attended by a number of federal, provincial, and municipal politicians and reported on by various Chinese state media.

Prime Minister Justin Trudeau sent a letter to the event organizer on the occasion of the popular Chinese festival.

“On this occasion, I join many Canadians in expressing my appreciation of the Chinese community. Canada is a nation made stronger and more resilient by our multiculturalism. This event offers a wonderful occasion for community members to reflect on their important place in Canada,” Trudeau said in the letter, obtained by Chinese-language digital media Lahoo.ca.

“Thank you to all who helped organize this event, and to everyone in attendance for this celebration.”

The Epoch Times requested comment from the Prime Minister’s Office and the other politicians who attended the event, but didn’t hear back by publication time.

‘Spread the Voice of the CCP’

At the Sept. 10 event, Xu, a well-known figure in the B.C. Chinese community, unveiled the new library, calling it a “book drifting station.” She explained that “drifting” refers to the books having been first collected in China and then going on to other parts of the world.

The new library is part of a project spearheaded by the Nantong Overseas Chinese Library based in Nantong City, Jiangsu Province, China.

The Nantong library’s online catalogue shows its  top category as being “Marxism, Leninism, Mao Zedong Thought, Deng Xiaoping Theory,” followed by the categories of philosophy and religion, social science theories, politics and law, military affairs, and economics, among other topics.

The Nantong library was founded by Zhen Xiang. He is also vice chairman of the Federation of Jiangsu Returned Overseas Chinese, which is the Jiangsu provincial branch of the All-China Federation of Returned Overseas Chinese, a key organization operated by the CCP’s United Front Work Department. The United Front is “a network of party and state agencies responsible for influencing groups outside the party, particularly those claiming to represent civil society,” according to the Australian Strategic Policy Institute in a June 2020 report it published on the CCP’s foreign interference activities.

Xu is president of the United Global Chinese Women’s Association of Canada and the Canada Jiangsu Overseas Federation Society.

Xu’s organization made a donation to the Nantong Overseas Chinese Library at an event on Oct. 22, 2021, which was covered by Ourjiangsu.com, a Chinese website directly owned by the Jiangsu branch of the CCP’s clandestine United Front. However, the article was removed after some Western media published reports on the library unveiling.

“In the future, book drifting stations of the Overseas Chinese Library will be established in various overseas locations,” Zhen said at the October 2021 event, according to the Ourjiangsu.com article. “[Nantong Overseas Chinese Library] will send our books there, grow even more donations, [so as to] spread overseas the voice of the Chinese Communist Party and country, as well as knowledge of Chinese culture.”

Xu, who travelled to China to attend that event, said at the time that Zhen’s donation was very meaningful in that it lets overseas Chinese around the world to be even better able to pass on Chinese culture to future generations, while allowing Chinese people in all corners of the world to learn about the history of the pioneering work of overseas Chinese.

An English-language article published on the Nantong city government website on Aug. 19 indicates that by mid-August 2022, the Nantong Overseas Chinese Library had clinched agreements with overseas Chinese organizations and Chinese-language schools in 27 countries to build a total of 42 book drifting stations. The first library of this kind was opened to the public in Kigali, the capital of Rwanda, on April 22, the article said.

The article also cited Zhen as saying the library is planning to build 100 book drifting stations overseas by the end of 2023.

The library unveiling in Vancouver included a special signing ceremony, with 11 Chinese-language schools and four educational institutions in B.C. entering into agreement to establish book drifting stations, according to the Lahoo.ca article, citing Xu as saying that the  Chinese Language Association of British Columbia (CLABC) helped to facilitate the agreements. This news was also reported by rmzxb.com.cn, a Chinese state-media outlet established and directly supervised by the Chinese People’s Political Consultative Conference, a political advisory body of the CCP and a central part of the United Front.

The Epoch Times reached out to Xu and CLABC for comment but didn’t hear back by publication time.

The purpose of the library project raises concerns of “cultural infiltration,” said Sheng Xue, a key leader of the overseas Chinese pro-democracy movement. Sheng serves as vice-president of the Federation for a Democratic China and is co-founder of the Canadian Coalition Against Communism.

“When an entity from China is introduced, it can only represent the Chinese Communist Party, because in China there is no such thing as a civil organization, institution, or even domain,” Sheng told The Epoch Times, noting that the CCP’s cultural infiltration is “unprecedented” and “multifaceted.”

“Westerners must realize that, for a CCP entity introduced into our society, its purpose is not what it appears to be—either cultural, educational, even language schools, language, or art. They are none of that, but rather the will of the Chinese Communist Party.”

Sheng said Canada and the Western society in general have had experiences in the past with Beijing’s efforts to infiltrate their organizations and communities with seemingly harmless interactions, pointing to the introduction of Confucius Institutes (CIs) in democratic countries.

She also pointed to Chinese-language media that are operating in Canada despite protests by pro-democracy overseas Chinese communities, which has resulted in the majority of the roughly 1.5 million Chinese-Canadians receiving content representing the CCP.

“This in itself poses a direct harm to Canada,” she said.

“Now we see the Confucius Institute is facing global sanction, and they are shutting down one by one, and many are becoming aware of the CCP’s media, so [the Party] is now promoting a so-called library project, but their purposes are exactly the same.”

Sheng said that many Canadian politicians are eyeing the large Chinese-Canadian community as a way to garner votes, but notes that while these politicians cater to the groups cooperating with the CCP, they have neglected the “silent majority” of Chinese immigrants who came to Canada in search of freedom and democracy.

“We should also be reminded that while the CCP seems rampant and active, there is a silent Chinese majority,” she said. “Canadian politicians should know that what they are doing is hurting … those of the silent majority in the Chinese community, and the majority of Chinese communities will shun [those politicians].”

“The alliance plans to select high-quality Chinese-language schools or Chinese education institutions from around the world and form alliances with them to jointly promote higher-level Chinese language education and cultural exchange activities,” reported the  rmzxb.com.cn media outlet.

Xu is listed as an an honorary chair on the website of the Canadian Alliance of Chinese Associations (CACA), an umbrella organization encompassing over 100 Chinese organizations that has been reported to echo the CCP’s party line.

CACA, as well as the other two organizations Xu is affiliated with, were among 87 signatories of a letter published on Aug. 16 on Dawa News, a Chinese-language media website, that supported Beijing’s recently published  white paper on Taiwan. The paper, titled “The Taiwan Question and China’s Reunification in the New Era,” has been widely reported as an indication of the regime’s heightened will to invade the self-ruled democracy by force.

In 2020, Xu was expelled from Liberal MP Joyce Murray’s WeChat group for pushing for a lawsuit against Global News investigative journalist Sam Cooper. Earlier that year, Cooper had published an article exposing the United Front’s operations in Canada that involved bulk-buying personal protective equipment and sending it to China ahead of the announcement of the COVID-19 pandemic.