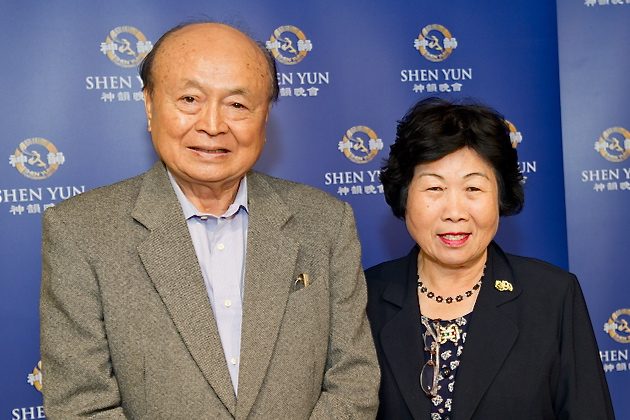 He said, “Shen Yun inspires the audience to do good things. In particular, the connotation of the lyrics is very inspiring. Shen Yun seems to remind me to walk toward a better path of life.”

He also noted, “All of the music played by the orchestra is excellent. They are very soft, good to hear, and match the programs very well. The design of the program is very good. After seeing it, people can enlighten to a lot of meaning in life. Both male and female vocalists, including the tenor and the soprano, did an excellent job, and the content of the lyrics is also very good.”

Mr. Hua was particularly impressed by the final program, Before Disaster, the Divine is Rescuing. In this dance, the good are spared from a calamity, according to the program.

Ms. Li, who is a board member of the National Council of Women of Taiwan, R.O.C., also praised the performance. She said, “I feel that Shen Yun is very dedicated, as it shows Chinese classical culture through the dances. The visual effect is very good. It’s great to combine education with entertainment.”

“The collocation of costumes [and dances] was also very good. For instance, the costumes of the dance Lotus Leaves were like lotus leaves, and the costumes in the program Flower Fairies were like flower fairies, which was very pleasing to see.

“The music was very peaceful, and the stories of the dances were very close to our lives, such as, the Crazy Ji, and the Journey to the West.”

Ms. Li particularly enjoyed Dance of the Qiang People, and said she felt close to it.

According to the program booklet, “The Qiang, also called the Erma, are one of China’s oldest ethnic groups. Its people are skilled in the arts and architecture, and live in southwestern China. Qiang ethnic dance is characterized by its free-swinging movements and lively steps.”

Referring to the program, Joyful Little Monks, Ms. Li, who is a retired primary school principal, said: “It was very realistic, similar to the situation of our school pupils. If the teacher is not around, they tend to be mischievous, while the teacher is with them, they tend to be rather obedient. In terms of artistic values, the overall performance is excellent.”

Reporting by He Xiue and Billy Shyu.