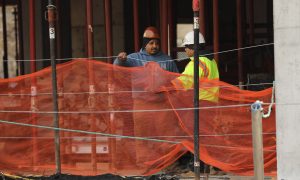 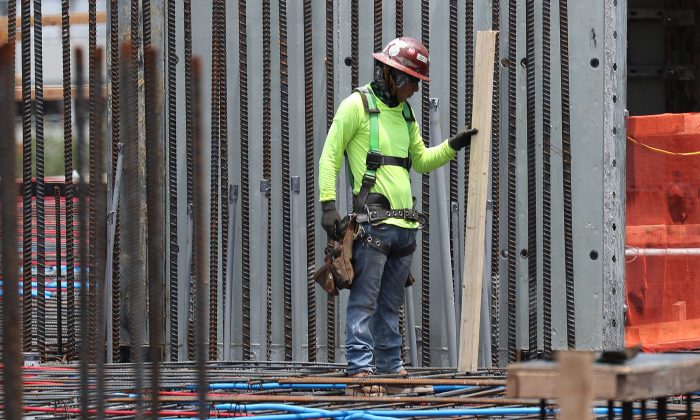 A construction worker is seen at work in Fort Lauderdale, Fla., on May 03, 2019. (Joe Raedle/Getty Images)
Economies

Private employers added 27,000 job in May, the fewest since March 2010, according to the ADP National Employment Report released June 5.

The unusually low number fell far below the 123,000-230,000 private job gain expected from the ADP report by economists surveyed by Reuters. It contrasted with the data released June 5 by the Institute for Supply Management (ISM), which showed that services sector activity expanded at a brisk pace in May and industries hired more workers.

The ADP number may be a sign of labor shortages, but may also be an aberration, since job growth numbers so low are usually only a single-month occurrence, based on historical data, except as a part of an outright recession.

The official job growth numbers are scheduled for release on June 7 by the Bureau of Labor Statistics (BLS). ADP is a payroll processor and gathers its data from its clients, while the BLS surveys a nationally representative sample of business. The two differ significantly at times, but generally average close to each other over time. The ADP reported 271,000 additional jobs in April, while the BLS reported 236,000.

About 100,000 additional jobs a month are needed for the economy to keep up with population growth.

“Following an overly strong April, May marked the smallest gain since the expansion began,” said Ahu Yildirmaz, vice president and co-head of the ADP Research Institute. “Large companies continue to remain strong as they are better equipped to compete for labor in a tight labor market.”

The ADP data, which is crunched with the help of Moody’s Analytics, showed large businesses with more than 1,000 employees expanding payrolls by nearly 60,000, while small businesses with fewer than 20 employees shrank by 50,000 jobs.

The largest increase by sector was in healthcare and social assistance (34,000) and the largest decrease was in construction (36,000).

The ISM said its non-manufacturing activity index rose 1.4 points to a reading of 56.9 in May. A reading above 50 indicates expansion in the sector, which accounts for more than two-thirds of U.S. economic activity. Economists polled by Reuters had forecast the index would be unchanged at 55.5 last month.

The May increase in services industry activity reflected a jump of 1.7 points in the production subindex. Activity was also boosted by gains in the new orders measure.

A gauge of services industry employment surged 4.4 points to a seven-month high. The ISM said that while businesses in the services sector were mostly optimistic about overall business conditions, “concerns remain about tariffs and employment resources.”

There has been anecdotal evidence of worker shortages in the transportation, manufacturing, and construction industries. But steadily rising wages appear to have on balance been keeping workers in the labor force and drawing back those who had dropped out.

The 25 percent tariffs levied by President Donald Trump on $250 billion of annual imports from China have raised costs for some businesses and consumers, but don’t appear to have severely affected the economy in general.

Trump has announced another 5 percent tariff on imports from Mexico, effective June 10, if Mexico doesn’t stop the flow of migrants from Central America who have been entering the U.S. illegally. The tariffs are supposed to increase by an additional five percentage points every month until reaching 25 percent, or until the problem is resolved.