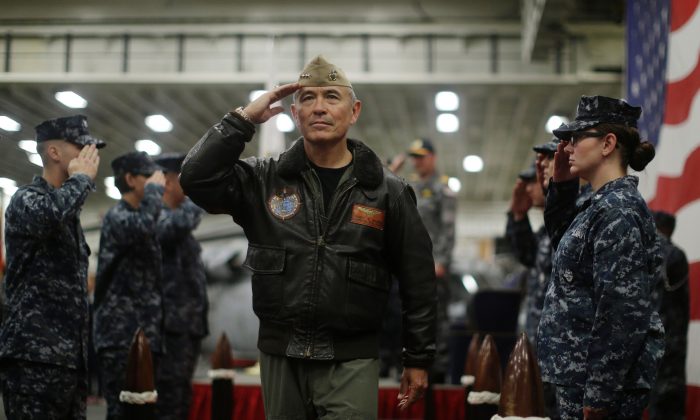 U.S. Navy Adm. Harry Harris, Commander of the U.S. Pacific Command, salutes at a ceremony marking the start of Talisman Saber 2017, a biennial joint military exercise between the United States and Australia, aboard USS Bonhomme Richard on June 29, 2017. President Donald Trump has announced the intention to nominate Harris to be the next U.S. ambassador to Australia. (Jason Reed/AFP/Getty Images)
Trump Administration

The choice of Adm. Harry Harris will reassure Canberra and irritate Beijing
By Paul Huang
Print

WASHINGTON — President Donald Trump has announced the intention to nominate U.S. Navy Adm. Harry Harris to be the next U.S. ambassador to Australia. Harris, who is the top commander of the U.S. military in the Pacific, is a noted hard-liner when it comes to countering Chinese military aggression in the Pacific to such an extent that the Chinese regime had previously demanded that he be fired.

Harris, 61, is completing his three-year assignment as the head of U.S. Pacific Command. During his tenure as the top commander of U.S. military forces in the Pacific in both the Trump and Obama administrations, Harris is well-known for his tough stance and outspokenness on countering military aggression from China and North Korea. Harris has led the Pacific Command in conducting numerous freedom of navigation operations under which U.S. ships and aircraft challenge other countries’ maritime claims, particularly China’s.

Harris has singled out the Chinese regime’s military aggression and expansion in the Pacific as a threat to the region. He has previously described the regime’s militarization of artificial islands in the South China Sea as creating a “Great Wall of Sand.”

Harris’s hawkish stance was such that the Chinese regime has on numerous occasions criticized the U.S. admiral and even demanded his firing. The regime’s state media even suggested that Harris may be biased in favor of Japan because his mother was Japanese.

Ian Hall, a professor of International Relations at Australia’s Griffith University, says that Trump’s choice of Harry Harris is a good one from an Australian point of view as Harris understands the value of the alliance and will reassure Canberra about Washington’s engagement with the region and its commitment to U.S. allies.

“It will also irritate Beijing, given how robust Harris has been on China’s island-building activities in the South China Sea and its behavior toward its neighbors,” Hall said.

The U.S. ambassadorship to Australia is sometimes given to presidential donors or friends. However, Trump’s choice of an active Navy admiral known for his tough stance against Chinese aggression is sure to be noticed by Canberra, which has seen rapidly increasing concern about the Chinese regime’s political interference in Australia in the past year.

A series of high-profile investigative reports by Australian media across 2017 have revealed the significant extent of the Chinese Communist Party’s control and influence over Australia’s political institutions, businesses, and academia, as well as the Chinese students studying there.

In the country’s latest foreign policy whitepaper published last November, Australia’s Malcolm Turnbull government says that the country will actively stand up to China’s challenges while calling for stronger support from the United States.

Under both Turnbull and the previous Tony Abbott government, Australia’s Foreign Ministry led by Minister Julie Bishop has a track record of voicing Australia’s opposition to China’s growing aggression and encroachments across the region.