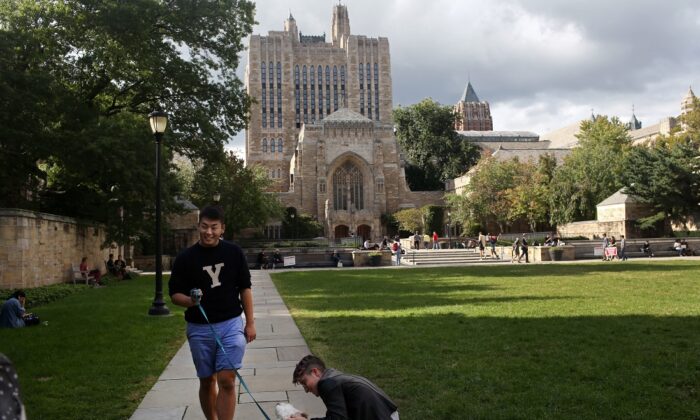 Admirable Evasions and the ‘Psychopathic Problem’ at Yale

In 2015, in my role as publisher of Encounter Books, I published “Admirable Evasions: How Psychology Undermines Morality,” a gimlet-eyed analysis of the profession by Theodore Dalrymple.

The title, as many readers have recognized comes from “King Lear.”

The line is spoken by Edmund, the illegitimate son of the Earl of Gloucester and one of the play’s chief villains.

He is also given some of the play’s most brilliant lines.

This is the excellent foppery of the world, that,
when we are sick in fortune—often the surfeit
of our own behavior—we make guilty of our
disasters the sun, the moon, and the stars; as
if we were villains by necessity; fools by
heavenly compulsion; knaves, thieves, and
treachers, by spherical predominance; drunkards,
liars, and adulterers, by an enforced obedience of
planetary influence; and all that we are evil in,
by a divine thrusting on: an admirable evasion
of whoremaster man, to lay his goatish
disposition to the charge of a star!

Back then, a crutch, an excuse for bad behavior might be astrological: we lie or cheat or pander not of ourselves, but because of an external influence beyond our control.

The worm of our infirmity is not in us but elsewhere, hence we are not truly, not fully, guilty of our bad behavior.

Indeed, with a little ingenuity, we can argue that our bad behavior, being instigated by something outside ourselves, makes us victims, hence deserving of pity if not celebration.

Edmund wasn’t taken in by such subterfuges.

He understood that his infirmities were his and his alone: “Tut, I should have been that I am, / had the maidenliest star in the firmament / twinkled on my bastardizing.”

Today, of course, we don’t find excuses for depravity in the stars but in our upbringing, our bank account, our sex, our skin color.

I am habitually late for work, but it is because I grew up poor.

I take drugs, but it is because I am oppressed.

I burned down a police station/shot a cop/looted a store but it was because of “systemic racism.”

Or maybe it is because of “the patriarchy.” Or “hetero-normativity.” Or “transphobia.”

The list is long, but no less specious than the “spherical predominance” or “planetary influence” Edmund contemptuously adduces.

I have thought about this dynamic over the past few days as the indispensable Bari Weiss has brought Yale University’s latest folly to the public’s attention.

Last week, Weiss linked to an audio recording of a virtual Grand Rounds given by Dr. Aruna Khilanani in April at the Yale School of Medicine’s Child Study Center.

Grand Rounds is at the Yale School of Medicine’s Child Study Center; bear that in mind.

Khilanani is billed as a “forensic psychiatrist and psychoanalyst.” She practices in Harlem but studied at the toniest institutions: Columbia, NYU’s Langone Medical Center, and New York-Presbyterian Hospital/Weill Cornell Medical Center.

According to her website, Khilanani is “interested in every single person who has a story that has yet to be told. … Conservative, Liberal, Old, Young, Blue, Black, CIS, Trans, Asian, Fat, Skinny, rural, urban,” and so on.

Her talk, “The Psychopathic Problem of the White Mind,” wasn’t so welcoming.

Under the rubric “learning objectives,” a poster accompanying the talk tells us “at the conclusion of this activity, participants will be able to ‘understand how racism is part of the mind that white mind that arose during colonialism with a series of lies around violence’” [sic].

Yes, there is something deeply wrong in that sentence. But it’s not only a matter of typos or misprints.

The disease is deep.

Just how deep is on view in some of Khilanani’s more piquant observations. To wit:

And here, at about seven minutes into the presentation, is the observation that has been getting all the ink.

Khilanani is clearly a sick puppy. Most observers will wonder why she is allowed to see patients rather than being required to seek help herself.

But the real psychopathology here goes far beyond Khilanani.

It involves, in the first instance, Yale University, the Yale School of Medicine, and in particular, its Child Study Center.

According to that poster advertising the talk, its “target audience” was “trainees in child psychology, psychology, and social work, faculty, clinicians, scientists.” Really?

Moreover, the course of which Khilanani’s talk was a part “will fulfill the licensure requirement set forth by the State of Connecticut.”

“I had fantasies of unloading a revolver into the head of any white person that got in my way, burying their body, and wiping my bloody hands as I walked away relatively guiltless with a bounce in my step.”

Will that be on the exam?

Yale, like most of the best and most prestigious educational institutions today, is a bastion of woke identity politics.

Increasingly, it substitutes the new “planetary influences” of race, the “spherical predominance” of exotic sexuality with the more pedestrian talismans of learning, intellectual rigor, and civic responsibility.

In this sense, Khilanani is more a symptom than a cause of the disease.

She embodies, to be sure, an ugly and repellent expression of the sickness that is ravaging our elite institutions.

But the cause is in the spirit that would not only allow but actually celebrate such disgusting performances as “The Psychopathic Problem of the White Mind.”

Remember, this was not at some wacko fringe grotto but at Yale University, operating in this instance as an agent for the State of Connecticut.

People like Khilanani should be watched closely but, after being ostracized from any contact with the vulnerable, ignored.

It’s institutions such as Yale and the regulatory apparatus of the state that need to be exposed and then dismantled.

Granted, it is a tall order.

Prudent people will give Khilanani a wide berth. But she has done us all a service by showing us the alternative.