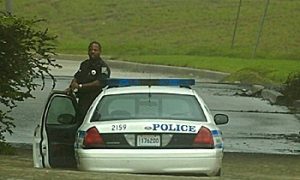 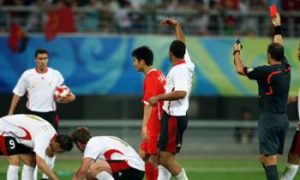 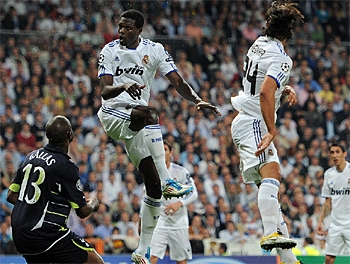 By Denis Charlton
Print
Emmanuel Adebayor headed a goal in each half to lead Real Madrid to a comfortable 4–0 victory over Tottenham Hotspur in their Champions League quarter-final first leg encounter at the Bernabeu. Second-half strikes from Angel Di Maria and Cristiano Renaldo completed the rout leaving the English club with a mountain to climb in the second leg.

During his days at Arsenal Adebayor scored more goals against the Gunner’s bitter North London rivals than against any other club. Currently on-loan from Manchester City, the Togo international striker took only four minutes to open his account in this one, heading powerfully into the bottom corner between a grasping Heurelho Gomes and the Spurs keeper’s right-hand post.

Upon going behind the Spurs endeavored to make amends, and with seven minutes on the clock Rafael van der Vaart crossed only for Peter Crouch to head over. Seconds later Crouch threw himself into a tackle and was booked.

Eight minutes later the frustrated England striker lunged at Marcelo, missing the ball by some distance. He did, however, make contact with the Brazilian who went flying head over heels. The outcome was never in doubt and Crouch was on his way back down the tunnel with a pat on the back from a grateful Jose Mourinho.

In fact Mourinho’s side initially failed to capitalize on their man advantage and Gareth Bale and van der Vaart both had chances to sneak a goal back for the visitors.

Adebayor could have doubled Real’s lead at 32 minutes but failed to gain enough height to make contact with a cross from point-blank range which the merest touch would have diverted into the Spurs’ net.

A couple of minutes later Real’s Brazilian-born Portuguese right back Pepe scythed down Gareth Bale; the ensuing yellow card means he will miss the return leg.

As half-time approached Real started to turn the screws and Michael Dawson was lucky to get away with a blatant handball a yard inside the penalty area. Harry Redknapp would have been relatively satisfied that his charges had managed to keep the deficit down to one at the break.

Real Dominant in the Second Half

The second half was a different story. Perhaps it was a special team talk from “the Special One” that made the difference but Real certainly came out for the second period with all guns blazing. Spurs simply could not get the ball out of their own half—it was only a matter of time before the pressure told.

With 56 minutes gone Adebayor took advantage of some slack marking and powerfully headed Marcelo’s fine cross wide of Gomes. He nearly completed a hat-trick nine minutes later but Gomes tipped the ball over.

The game was made safe for the Spanish club at the 71-minute mark thanks to a superb left-footed strike from the right hand corner of the penalty box by Angel Di Maria. It was a drive of extreme ferocity from the 23 year-old Argentinian and Gomes could not be faulted.

However, this was not the case with Real’s fourth. Cristiano Renaldo’s shot was struck crisply enough but Gomes really should have done better at his near post.

It is hard to imagine Tottenham scoring five unanswered goals in the return leg at White Hart Lane so, barring an absolute miracle, Real Madrid will take their place in the semi finals.

Shock at the San Siro

Real are likely to be joined in the semi finals by Schalke who sprang a real surprise by pulling off a remarkable 5–2 win away to holders Inter Milan. Inevitably, former Real Madrid star Raul was on the scoresheet for the Germans, netting his 70th goal in European competition.