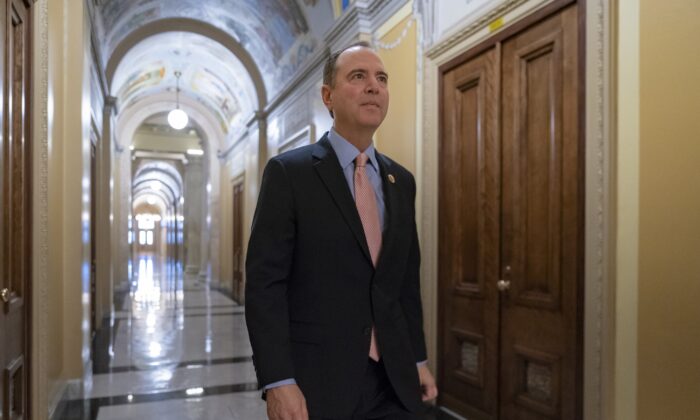 Rep. Adam Schiff (D-Calif.), chairman of the House Intelligence Committee, walks to a secure area at the Capitol to interview a witness in the House impeachment inquiry in Washington on Nov. 6, 2019. (J. Scott Applewhite/AP Photo)
Politics

Members of the House Intelligence Committee, chaired by Rep. Adam Schiff (D-Calif.), will have 24 hours to view a draft report on the Democrat-led impeachment probe before a vote on Dec. 3, Politico reported late Nov. 30.

If the draft is approved, which is expected if members vote according to party lines, it will proceed to the House Judiciary Committee. That committee is scheduled to hold its first impeachment hearing on Dec. 4.

The hearing, titled “The Impeachment Inquiry into President Donald J. Trump: Constitutional Grounds for Presidential Impeachment” will, according to a letter to Trump from Judiciary Chairman Rep. Jerrold Nadler (D-N.Y.), address “the historical and constitutional basis of impeachment as well as the Framers’ intent and understanding of terms like ‘high crimes and misdemeanors.'”

Nadler said that he hoped Trump and his counsel would participate in the Judiciary Committee hearing (pdf).

Trump criticized the timing of the hearings, which will coincide with his visit to London to attend a summit of NATO leaders.

The ranking Republican on the Judiciary Committee, Rep. Doug Collins (R-Ga.), wrote to Nadler on Nov. 21 to request that Schiff turn over all evidence, unredacted, seen in the impeachment inquiry into Trump.

“In light of how Chairman Schiff is conducting the impeachment process and pursuant to Section III of H. Res. 660, all materials in the custody of the Intelligence Committee should be transmitted immediately to this Committee,” Collins wrote.

“Without all documents and materials considered by the Intelligence Committee, this Committee will be unable to fulfill its obligation to the American people to carefully consider a matter as dire as removing a duly elected president.”

The Dec. 4 hearing follows closed-door depositions by the Intelligence, Oversight, and Foreign Affairs committees, and two weeks of public hearings in front of the Intelligence Committee that focused on Trump’s approach to foreign policy in Ukraine. The president denies any wrongdoing.

With reporting by Jack Phillips.