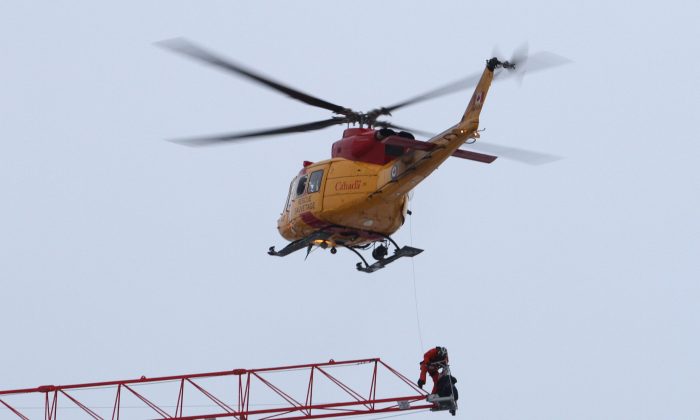 A rescue worker is lowered from a Canadian military helicopter as they retrieve Adam Jastrezbski, a crane operator who was stranded atop a crane when fire broke out in an apartment building under construction in downtown Kingston, Ontario, Tuesday, Dec. 17, 2013. (AP Photo/The Canadian Press, Lars Hagberg)
Canada

Adam Jastrezbski, the crane operator who was stuck then rescued during the Kingston Fire in Kingston, Ontario is ready to retire.

Helena Jastrezbski said that he is suffering from burns but is improving in the hospital.

She told CBC that although the crane is like a second home to her husband, he is ready to retire.

The fire sprang up in the downtown on Tuesday, engulfing multiple buildings and forcing hundreds to evacuate.

The crane was badly damage and is threatening collapse; crews worked on Wednesday to dismantle it.

The fire is still burning because the crane is blocking fire crews from the remaining flames and hot spots, but most of it has gone out.