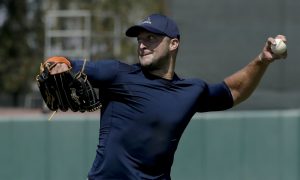 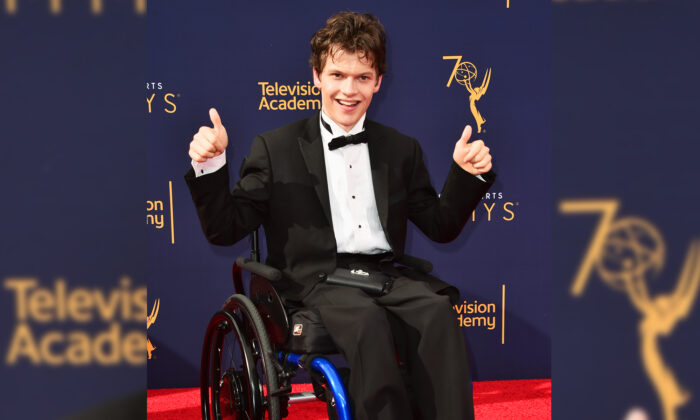 Micah Fowler has made a name for himself in Hollywood as a talented actor with cerebral palsy. However, besides glitzy premieres, Fowler has also been papped on the red carpet for an amazing charitable cause.

Thank you @timtebow for everything you do. It means so much to me and so many others. You’re such an inspiration. I had so much fun tonight! #nighttoshine

“The way the volunteers celebrate you and cheer you on when you roll, walk, or crawl down the red carpet is really something special,” Fowler continued. “It feels like home, and safe, like the rest of the world should be.”

#NightToShine is the best night. You have to go. I had such a good time tonight with my sister, my mom, some friends from high school and my buddy Russ! Thank you @baysidechapel for hosting us and @timtebow & @timtebowfoundation for putting on such a great night. I absolutely loved it and already can’t wait for next year. 🎉

Fowler experienced being one of 110,000 celebrated guests at Tebow’s fifth annual event. Every guest, as happens each year, was cheered down the red carpet, treated to a lavish dinner, music, games, and dancing, and eventually crowned king or queen of the prom.

“There are very few dance floors like the one at Night to Shine,” Fowler praised. “[N]one compare!”

Fowler added that he had been inspired by Tebow’s compassion for people. “After meeting him last year, I am sure Tim is one of the greatest human beings that ever lived,” Fowler told Fox News, “and absolutely one of my heroes.”

••MUST READ STORY•• From a mom at Hiland Park Baptist Church – Panama City, FL: "I can't possibly put into words my…

“Our differences should be celebrated,” Fowler continued, speaking on behalf of the special-needs community, “and this is one night that I know for sure I and my disability will be cherished and celebrated for exactly who I am, and who I was made to be.”

Many fans of Tebow’s charitable work agree with Fowler. Responding to Fowler’s attendance at Night to Shine on Facebook, readers showered the athlete with praise.

“Tim Tebow is like a modern day Mr Rogers,” wrote one fan, “always has a smile and helping others. His compassion and selflessness make him a great role model.”

“I enjoyed watching Tim Tebow play football,” wrote another, “but this may be why he is on this earth.”

Fowler’s sister, Kelsey, is an actress on Broadway. Fowler made his acting debut in 2013’s “Labor Day,” and according to the Tim Tebow Foundation, it was Kelsey’s agent that first head-hunted Fowler from the audience of ABC talk show “The View.” Kelsey was being interviewed at the time.

On March 5, 2016, Fowler’s 18th birthday, the young actor received the news that he had been cast as J.J. DiMeo, Minnie Driver’s teenage son in the family sitcom “Speechless.”

Across the US, Night to Shine is kicking off! Please be in prayer for all the guests as they arrive— this is a night we pray they truly feel loved and special!

“He just lit up the screen,” “Speechless” creator Scott Silveri told The Wrap. “He was so effortlessly funny and endearing. He gave us everything we were looking for.”

As per the Tim Tebow Foundation, Fowler uses a wheelchair and is able to walk short distances with the assistance of a walker. He is also able to speak, with some difficulty; not everybody with cerebral palsy retains this faculty.

A 2018 study of 1,100 films made between 2007 and 2017, authored by Professor Stacy L. Smith and the Annenberg Inclusion Initiative at USC’s Annenberg School for Communication and Journalism, discovered some alarming statistics.

In 2015, the Tim Tebow Foundation launched an idea to honor people with special needs with a celebration of God's love for them. Now, every year around the world hundreds of thousands come together on one night around one dream…This year, we saw 721 host churches come together, across all 50 states and 34 countries, through the support of 215,000 volunteers to celebrate 110,000 honored guests!“I want to say thank you to all of the host churches and coordinators, volunteers, vendors, prayer warriors, and donors who have helped make Night to Shine possible not only this year, but every year. We’re so incredibly grateful for each of you, and truly could not do this without your support. Thank you for being a part of this family, this movement, and this effort to value every person’s life. I sincerely believe us coming together is making a huge difference in the lives of individuals all over the world!”- Tim TebowThank you to our Night to Shine Global Partners: American Residential Services LLC & OneShare Health

Not only did fewer than 3 percent of the films’ speaking roles feature disabled characters, but even fewer characters were actually portrayed by actors who had special needs themselves. Fowler is something of a trailblazer.

“We still receive messages and stories of how [Fowler’s] portrayal of J.J. has challenged views and changed the lives of those with and without disabilities around the world for the better,” Fowler’s sister, Kelsey, told Fox News.

“The impact he’s had is immeasurable,” she added, “and he’s only just getting started.”