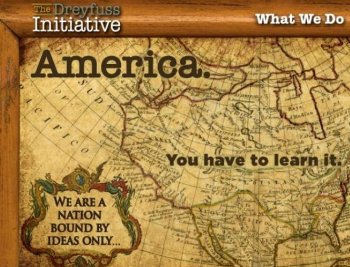 UNDERSTANDING AMERICA: A screen grab from the website of The Dreyfuss Initiative, an organization that provides a platform for educators, sponsors and supporters who value the importance of civics and its role in public education, initiated by actor Richard Dreyfuss. (Jim Fogarty/The Epoch Times)
US

Andrea Hayley
Reporting on the business of food, food tech, and Silicon Alley. Studied the Humanities for undergrad, and obtained a Master of Arts in business journalism from Columbia University. I love covering the people, and the passion, that animates innovation in America. Email me at andrea dot hayley at epochtimes.com
View profile
Follow
biggersmaller
Print
WASHINGTON—Richard Dreyfuss, an award-winning actor, is sounding the alarm. He said American public education over the last 50 years has failed to teach students how to be responsible citizens. He points to the abysmal and shrill status of public discourse today as evidence.

True citizen engagement has been in decline since the 1960s, Dreyfuss said, when television advertising and social movements, such as the emergence of a drug culture, anti-segregation, and women’s rights, impressed on Americans an ugly sense of cynicism that has lasted to this day.

When television entered American homes, one mainly saw old films featuring Americans fighting “the good fight” against evil men such as Hitler and the forces of tyranny. These had the effect of besotting us with love for our country, said the 63-year-old Dreyfuss at the National Press Club on Tuesday.

“The goal of bettering ourselves as humans and as citizens” needs to be restored, he said.

Within our lifetime, institutions of schools, churches, and family “have all rolled over and forgotten their mandates,” said Dreyfuss.

Increasingly, the media has assaulted people with energetic and enthusiastic vigor, distracting, misleading, and taking people off the beat, he added.

After an impressive acting career with starring roles in movies such as “Jaws,” “Close Encounters of the Third Kind,” and “The Apprenticeship of Duddy Kravitz,” an Academy Award for Best Actor for “The Goodbye Girl,” and nominations for an Oscar and Golden Globe for his role in the 1995 blockbuster “Mr. Holland's Opus,” Dreyfuss has turned his attention to his second passion.

Endowed with an early political education at Oxford St. Andrew’s College, Dreyfuss has announced the Dreyfuss Initiative, which is a nationwide platform for uniting educators and advocates around the importance of civics education in public schools.

Sponsors include the Girl Scouts, National PTA, Thomas Jefferson Institute for Public Policy, and VoteiQ, which Dreyfuss supports as a member of its advisory board.

A distinguished set of civics advocates work for the initiative directly. The goal over the next few months is to consolidate stakeholders.

The plan is to identify individuals and points of excellence from around the country, and elevate best practices to a national forum so that others can adopt them, said Scot Faulkner, executive director of the Initiative.

Dreyfuss is also working on a curriculum for pre-school through grade 12 students. The goal is to invent civics in the popular psyche, said Faulkner.

A website, www.TheDreyfussInitiative.org gives adult citizens a few ideas about how to become more engaged. For example, individuals are encouraged to speak in schools, organize field trips to local government and community agencies, and/or set-up online community forums to archive and share local ordinances, regulations, processes, and documents.

Public officials should make sure that the public is given ample time and information to prepare for public meetings, and to post all relevant public documents online in a way that allows easy access.

Media members should hold public officials accountable and look beyond the immediate news in order to identify underlying themes and trends.

Dreyfuss sees his biggest task that of making people aware of the severity of the civics crisis, which he says is largely invisible.

The actor/activist gave examples of where he believes that public responsibility falls short.

Citizens United v. Federal Election Commission, a 2010 Supreme Court decision that made it legal for political campaigns to receive unlimited funding from corporate and organizational sources, opened the door for “the oppression of caste and class by wealth,” according to Dreyfuss.

“To have done that thing, which so distorts our entire society as to allow money to be the major value in politics and its communicative value to the public, is a shame, it is a true shame on the country, because it so much strengthens the disconnect that we must all feel for one another either by sector or by individual,” he said.

Dreyfuss also points to a lack of scrutiny accorded by the media to the last two presidents. His initial foray into politics was motivated in part by his own outrage at revelations that former President George W. Bush seemed to get away with breaking federal wiretap laws. In 2006 Dreyfuss tried to instigate a public campaign to impeach Bush, but it led nowhere.

“There was no plan on the part of the Bush administration,” said Dreyfuss. “It was a series of improvisational steps, all taken by gauging your outrage, which didn’t exist, and so they went further.”

Dreyfuss believes that the issues that are truly important to a functioning and civil democracy are often ignored by its citizens, especially within the last 10 years. Media is a big part of the problem. There is a failure to investigate and a failure to hold public officials to account, he said, resulting in an apathetic citizenry.