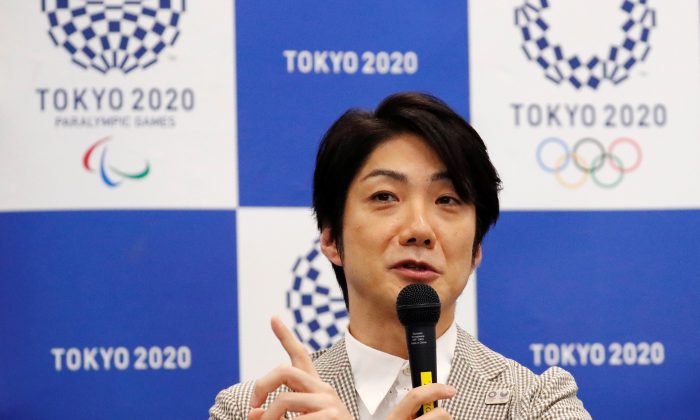 FUKUSHIMA PREFECTURE, Japan—Japanese actor Mansai Nomura will orchestrate the opening and closing ceremonies for the Tokyo 2020 Olympic and Paralympic Games. It was announced on Monday.

Following a Tokyo 2020 executive board meeting in Fukushima Prefecture, Nomura was named as the chief executive creative director overseeing all four ceremonies.

Nomura is best known in Japan for his performances as an actor featuring in kyogen, a traditional form of comedic theater. The 52-year-old won the prize for the best actor at the prestigious Blue Ribbon Awards in 2001.

“He is the person who is to carry out the image and the message of Tokyo 2020,” said Tokyo 2020 Honorary President Fujio Mitarai.

“That person has the role of implementing our spirit and vision of the Tokyo 2020 Games at all four ceremonies.

“Mansai Nomura is a renowned figure, both domestically and internationally and he is knowledgeable in both traditional Japanese art and modern theatrical art.”

The board meeting was held at the recently re-opened J-Village complex in Fukushima Prefecture. The facility, which previously played host to the Argentine soccer team during the 2002 World Cup, was used as a base for rescue teams working in the wake of the 2011 earthquake.

The earthquake killed approximately 18,000 people and also severely damaged the Fukushima nuclear plant rendering much of the area near the J-Village a no-go zone.

The re-opening of the J-Village last week is a symbol of the reconstruction that Tokyo 2020 hopes to encourage in the region.

“We wanted a source of hope for the nation and now our dreams are coming true and we are seeing a gradual revival of the disaster-hit areas,” said Tokyo 2020 President Yoshiro Mori.

“We are able to show to the world what we have been able to accomplish so far and where we are headed in terms of the reconstruction efforts since the disaster.”

The Games torch relay will start in Miyagi Prefecture, also damaged by the earthquake, before passing through nearby Fukushima and Iwate Prefectures in a symbolic tour.

During the meeting Mori, a former Japan prime minister, also proposed to introduce daylight saving time in Japan before the Olympics.

Japan currently does not switch its timezone during the summer months, when the sun rises very early bringing with it the heat and humidity.

Mori believes switching to daylight saving time before the Olympics would reduce temperatures for morning events such as the marathon and he had spoken to Japan Prime Minister Shinzo Abe on the issue.

“Japan happens to be the only country amongst the major developed nations that do not implement daylight saving time so we do need some kind of an occasion or opportunity to get started on this,” said Mori.

“Before we run out of time, the government needs to take this issue seriously to consider daylight savings time.”