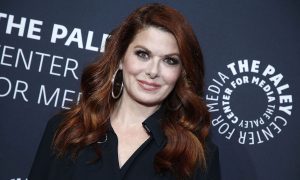 The history of a country is what establishes how its people view its stories, their heritage, and the broader culture that forms a nation. The Pilgrims who landed on Plymouth Rock came to this country with a very different intention than how America is often portrayed—that being religious liberty. Faith and belief have been the real driving force behind the American character. This history of the United States is shown in a new documentary, “America, America, God Shed His Grace on Thee,” which stars actor Nick Searcy. And to learn more about this, we’ve invited him to speak with us.

Meanwhile, China is threatening to arrest US nationals in China, as a form of retaliation to the Justice Department’s prosecution of scholars affiliated with the Chinese military. This is according to an exclusive story by The Wall Street Journal, which cited unnamed sources allegedly familiar with the matter. It reports that Chinese officials have repeatedly issued warnings to representatives of the U.S. government through multiple channels, including through the US Embassy in Beijing.

And new US government report details how China uses overseas students and scholars to feed its government programs and military development. The findings are detailed in an October 7 report from the US-China Economic and Security Review Commission, which says the leaders of China have “long sought to harness the intellect of overseas Chinese students and scholars for the state’s development and strategic priorities,” and notes over the last 30 years “their efforts have become more systematic and sophisticated.”