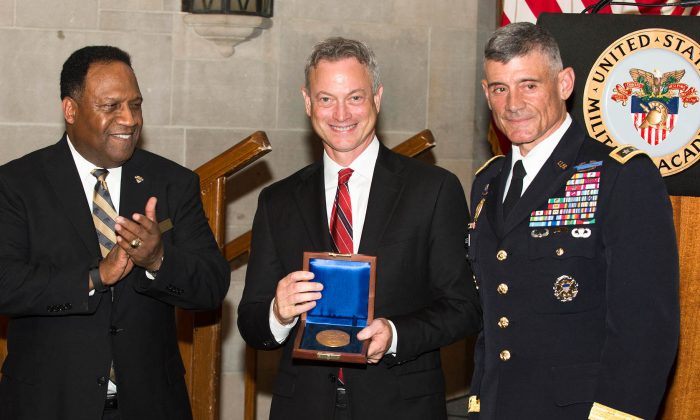 WEST POINT—Lt. Dan lives on in the hearts of West Point cadets. The actor who portrayed Lt. Dan in “Forest Gump” was presented with the 2015 Sylvanus Thayer award for using his acting skills to tell the story of America’s servicemen and women, and as an off-screen advocate for over 30 years.

Sinise reviewed cadets on parade and was guest of honor at a celebratory dinner enjoyed by the cadets and civilian and military well-wishers on Oct. 22.

The award was presented at a dinner hosted by Lt. Gen. Robert L. Caslen, superintendent of the United States Military Academy at West Point. West Point Association of Graduates Board Chairman Lt. Gen. (USA, Ret) Larry R. Jordan said a few words then, to applause and cheers, dramatically tossed aside a paper with his prepared speech to give more time for the Thayer honoree to speak.

Sinise said that the attacks on 9/11 had a lasting effect on him. He amplified his support to those on active duty, as well as veterans and first responders. Throughout the event honoring the actor, Sinise accepted the attention modestly, wearing a dark blue suit and a red, white and blue tie.

“I am humbled to receive the Sylvanus Thayer Award from the West Point Association of Graduates, and want to thank them from the bottom of my heart for recognizing my support of veterans and active duty military,” he said.

“To be recognized with such a distinguished honor is truly a privilege and I hope that this recognition only helps to further shine a light on the continuing mission of supporting those who serve and defend our great country,” Sinise said.

Sinise’s activism began in the early 80’s with his support of Vietnam vets and the creation of Vets Night, an evening of free dinners and performances at the Steppenwolf Theatre in Chicago. In the ’90s he began working on behalf of the Disabled American Veterans organization, which he continues to actively support.

Sinise’s portrayal in the 1994 Academy Award-winning film created an enduring connection with the military community. Widely known among servicemen for his portrayal of Lt. Dan in “Forest Gump,” Sinise formed the Lt. Dan Band in 2003 to do USO tours and entertain troops. The band now performs almost 50 shows a year for military bases, charities, and fundraisers supporting wounded warriors, Gold Star families, veterans and troops around the world.

Sinise has frequently used his dramatic skills to enhance the military’s recruiting and educational programs. He narrated Army and Army Reserve “Army Strong” recruitment ads in 2008 and was the executive producer, with David Scantling, of the Iraq War documentary, “Brothers at War.” The film features three brothers in an American military family—Jake, Isaac, and Joseph Rademacher.

He has narrated several military history documentaries, including the acclaimed World War II series in HD on the History Channel, and “Missions That Changed the War” on the Military Channel.

In 2011, he established the Gary Sinise Foundation to entertain, educate, inspire, strengthen, and build the military community. Programs include R.I.S.E (Restoring Independence and Supporting Empowerment), whose flagship initiative is a specially-adapted custom Smart Home building project for severely wounded veterans.

Sinise has received numerous honors for his service to the military and veteran communities, including the Presidential Citizens Medal in 2008, the second-highest civilian honor awarded to citizens for exemplary deeds performed in service of the nation and the West Point Outstanding Civilian Service Award.

The Thayer Award, established in honor of Col. Sylvanus Thayer, “Father of the Military Academy,” is presented to an outstanding citizen whose service and accomplishments in the national interest exemplify the military academy’s motto, “Duty, Honor, Country.”

The United States Military Academy at West Point is a four-year, co-educational, federal, liberal arts college founded in 1802. Its mission is to educate, train, and inspire the Corps of Cadets so that each graduate is a commissioned leader of character committed to the principles of duty, honor, and country and prepared for a career as an officer in the U. S. Army.

Several times during the awards presentation dinner, the assembled gave warm standing ovations to the actor, who seemed to discombobulated at all the attention. The West Point glee club ended the celebration with the school song and were accompanied by the cadets who stood at attention.