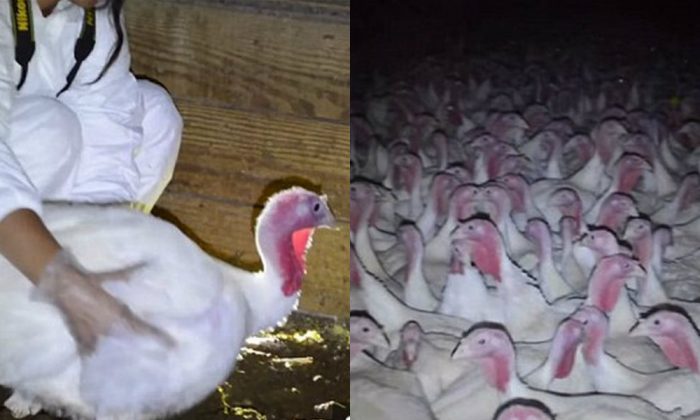 Advocacy group Direct Action Everywhere, known as “DxE,” says some turkeys supplied to Whole Foods live in crowded barns with feces covering the floor. They claim that the supplier, Diestel Turkey Ranch, is carrying out “an elaborate scheme to deceive customers about the horrific conditions.”

The activists released a video of the turkeys, complete with dramatic music and commentary:

DxE also released a video that purports to show turkeys with dirty, matted feathers and others with swollen eyes and other body parts. The video also shows a dead turkey decomposing among the live birds. The activists claimed that the footage was shot at one of the ranch’s large barns in Jamestown.

Diestel Turkey Ranch, which is in Sonora, Calif., said the video is misleading because it only shows a narrow period of time.

“We don’t know exactly where these pictures were taken or where the information is coming from for their report,” said Heidi Diestel, who is a member of the family business, told the Wall Street Journal.

“It is important to understand the mission of animal activist groups like this one isn’t farm animal welfare but rather a total end to animal agriculture and meat consumption,” Whole Foods said in a statement. “Within hours of this video being brought to our attention, Whole Foods Market sent an expert team to evaluate the conditions of the Diestel farm. Our team found that the conditions were not as they were portrayed in the video.”

According to the San Francisco Chronicle, Heidi Diestel would not confirm if the activists’ footage was shot her family’s facilities. She, however, said the Sonora ranch is home to Diestel turkeys.

“It is important to understand the mission of animal activist groups like this one isn’t farm animal welfare but rather a total end to animal agriculture and meat consumption,” Michael Silverman, a spokesperson with the chain, wrote in an e-mail to The Washington Post.

“Everything they say, do and show is produced with that specific goal in-mind.”