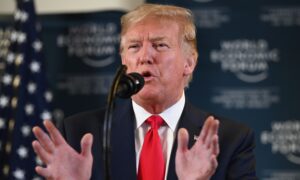 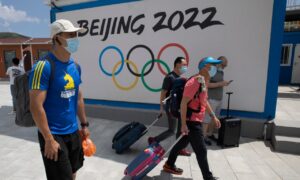 Activist Interrogated by Chinese Police for Ordering US Flags Online

Chinese activist Huang Yang was summoned to the local police station in Chongqing city on Oct. 6 for purchasing U.S. flags online, according to an insider.

The insider, surnamed Yang, told The Epoch Times in an interview that “at around 2:00 p.m., Mr. Huang Yang received a call from the domestic security team of Yubei district, Chongqing city.”

After U.S. President Donald Trump announced that he tested positive for COVID-19 on Oct. 2, some residents in Chongqing city wanted to plan an event to show their support, Yang said.

Huang and a few other people planned a gathering so they could take photos of themselves holding up American flags, and post their well-wishes to Trump on social media. Huang was responsible for placing the online order for the flags, Yang said.

The local police were alarmed and quickly intercepted. They discovered Huang’s plan through monitoring his phone calls. He was summoned to the domestic security team of the local police bureau.

When Huang arrived at the police station at 3:00 p.m. on Oct. 6, the police asked him to describe the number and size of the U.S. flags he ordered.

According to Yang, Huang told the police: “Why are you making such a big deal about this? Take a look at Sun Lijun, the former deputy minister of Public Security, and Deng Huilin, the head of Chongqing police. They were your top leaders, but both have been sacked. So, don’t think so highly of yourselves.”

After the interrogation process, the police gave Huang a verbal warning. He left the police station at around 7 p.m.

Yang said that since the U.S. flags that Huang ordered online are all made and sold in mainland China, then it shouldn’t be illegal to use them. He did not believe that Huang violated the law. But Yang wondered why the authorities were alarmed.

Some residents even joked: “The wicked CCP [Chinese Communist Party] regime is so scared of American national flags, as ghosts are afraid of amulets. Then why don’t we buy more?”

It’s not the first time that Huang has gotten into trouble with the authorities.

From Feb. 5 to 15, during COVID-19 lockdowns, Huang was summoned to the local police station four times for criticizing the Chinese regime on WeChat, a popular Chinese social media platform.

On Aug. 1, 2019, Huang was detained and mistreated at the police station for supporting Hongkongers who were protesting against police brutality and the CCP’s encroachment of Hong Kong’s liberties, according to Radio Free Asia (RFA).