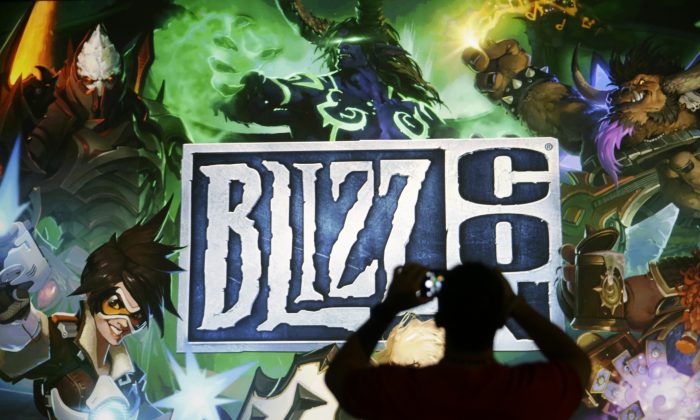 A man takes pictures of the BlizzCon sign at the opening ceremony of the convention, Friday, Nov. 6, 2015, in Anaheim, Calif. (AP Photo/Jae C. Hong)
Entertainment

ANAHEIM, Calif.—Activision Blizzard Inc. is moving deeper into the film and TV business.

The video game maker unveiled plans Friday at an investors meeting during the annual BlizzCon fan convention to create and release its own film and TV series.

The first projects from the newly formed Activision Blizzard Studios will be based on the “Call of Duty” military shooter franchise and kid-focused “Skylanders” toy-game series.

“We’ll have a fraction of the overhead of the typical studio since we’re starting with a blank page and building an organization that is right-sized for our intended creative output and for the future of the industry,” van Dyk told investors.

The first TV series from Activision Blizzard Studios will be “Skylanders Academy.” The computer-generated show is set to debut in 2016 and will feature the voices of Justin Long, Ashley Tisdale and Jonathan Banks.

The studio also is working on a “Call of Duty” film series, with the first installment likely ready for deployment in 2018 or 2019, according to van Dky.

“Our releases will be consistent with the high adrenaline, bad-(expletive) action that fans expect from this franchise, but we’re going to deliver this intellectual property to the broadest movie-going audience,” van Dyk said. “This will be tent-pole action-adventure of the widest appeal.”

‘Call of Duty’ Creators Buy ‘Candy Crush’ Maker for $5.9B

The move follows Activision Blizzard partnering with Legendary Pictures for a film based on Blizzard’s “Warcraft” fantasy franchise. The movie centering on the battle between the game’s orcs and humans is set for release June 10 and will be distributed by Universal Pictures.

“Warcraft” filmmaker Duncan Jones was on hand Friday with the film’s cast to debut a trailer for the movie at BlizzCon, a two-day celebration of Blizzard series at the Anaheim Convention Center.

“(Activision Blizzard) seems to feel pretty confident that video game movies might actually work,” said Jones backstage. “That’s a win for ‘Warcraft.’ I think as long as they get the right people involved, I’m sure they’ll be incredibly successful.”

The formation of a devoted studio is similar to Activision rival Ubisoft establishing a film and TV division in 2011. That studio is responsible for the Nickelodeon series “Rabbids Invasion,” as well as an “Assassin’s Creed” film based on the historical series starring Michael Fassbender, due Dec. 21, 2016.

A similar venture didn’t work out for Microsoft. After two years, the company closed its Xbox Entertainment Studios in 2014. The division had been tasked with creating series based on such Microsoft game franchises as “Halo,” ”Forza” and “Gears of War.”