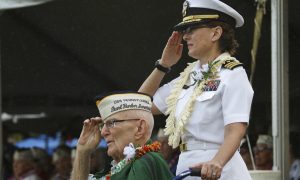 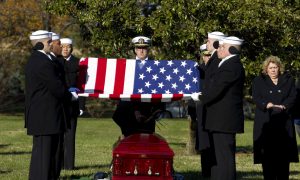 Videos of the Day: Veterans and Dignitaries Gather for 77th Anniversary of Pearl Harbor Attack
0 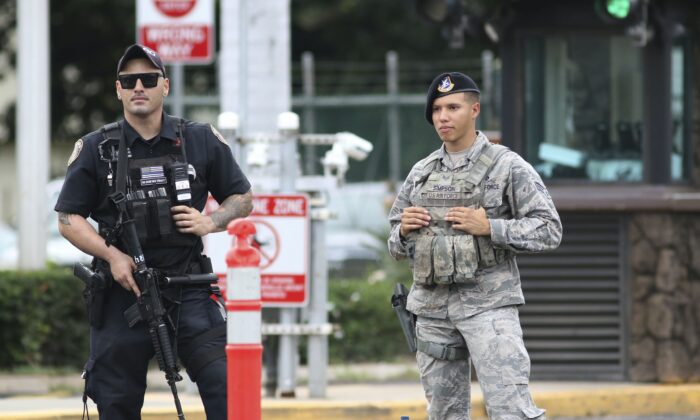 Security stand outside the main gate at Joint Base Pearl Harbor-Hickam in Honolulu on Dec. 4, 2019. (AP Photo/Caleb Jones)
US News

A U.S. sailor has taken his own life after opening fire on civilian workers at Pearl Harbor Naval Shipyard in Hawaii on Wednesday evening, officials have said.

In a press conference today, Rear Admiral Robert B. Chadwick, Commander of Navy Region Hawaii said that two of the victims were killed in the attack in addition to the shooter, while the third victim was in stable condition in hospital.

“I can report that joint base security personnel did respond to a report of an active shooter today in the vicinity of Dry Dock 2, in the Naval shipyard,” he told reporters. “I can confirm that there were three shooting victims. We have confirmed that two are deceased, and one is in a stable condition in a local hospital.”

The Queen’s Medical Center in Honolulu received one patient from the incident.

“I can also report that the shooter, who has tentatively been identified as an active duty sailor assigned to USS Columbia SNN-771 is also deceased by an apparent self-inflicted gunshot wound,” Chadwick said.

The Navy Commander said that the names of the victims, all males, will not be released until their loved ones have been informed. The shooter has also been identified as male.

It is not known what, if any, relationship the shooter had with the victims, and whether it was a random or targeted attack at Dry Dock 2, a maintenance area for nuclear submarines.

He added that support services will be provided for naval shipyard personal and anyone else who has been affected by the incident.

According to the official Twitter page of Joint Base Pearl Harbor-Hickam, the sailor opened fire on Department of Defense civilian workers around 2:30 p.m. HST (7:30 p.m. ET) and the area was immediately placed on lockdown. Chadwick added that in addition to a lockdown, a shelter and place order was sent out to all personal on joint base Pearl Harbor Hickam.

Base security and Navy investigative services are currently investigating the incident and witnesses are being interviewed at this time.

The Navy Commander praised the joint response to the incident, telling reporters: “It really was an incredible response. Joint base security Pearl Harbour security personnel were on the scene in minutes and HPD (Hawaii Police Department) also responded and did come on base to add assistance.”

He added that NCIS is now leading an investigation into the shooting and they will continue to share information with the public as and when they can.

Elsewhere in the press conference, Rear Admiral Chadwick said the Navy is always accessing the newest information and will continue to “make evaluations on any upgrades in security that are needed.”

“This is going to be fully investigated … We don’t know motives at this point, more details [are] certainly to come but we’ll be looking at every aspect of it, what lessons we can learn, what additional security procedures would be needed, but again we’re still very early in the investigation,” he said.

With reporting from The Associated Press.