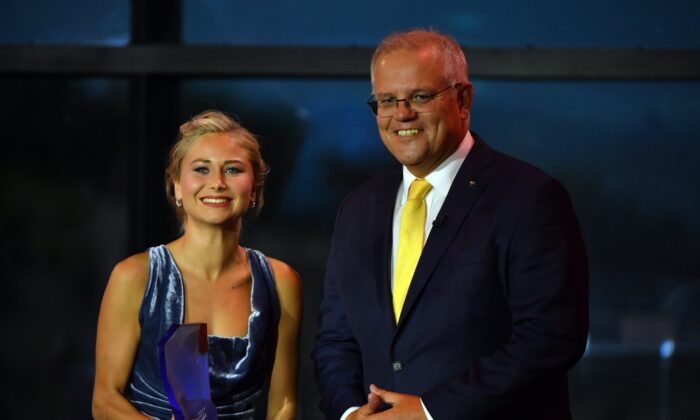 Prime Minister Scott Morrison said every Australian has a responsibility to address the problem with the culture that leads to violence against women but has been criticised for his words not matching his actions.

In his opening address to the National Summit on Women’s Safety on Monday, Morrison said Australia “does have a problem” with an attitude and culture that condones gender inequality.

“That is on all of us. Every Australian has a responsibility,” he said. “And we have to do better and strive to be better.”

Morrison called for everyone to play a part to help make the country “safe for every woman.”

“Right now, too many Australian women do not feel safe, and too often, they are not safe,” he said. “And that is not okay. There is no excuse, and sorry doesn’t cut it.”

However, Australian of the Year Grace Tame and former Liberal staffer Brittany Higgins have both criticised the prime minister’s speech.

She criticised the appointment of Lorraine Finlay as the new human rights commissioner considering her opposition to affirmative consent.

This position of Human Rights Commissioner, this is a power position … So what could have been a really progressive step has actually been a backwards one,” Tame told ABC radio.

Finlay also defended her views on Twitter, writing that her concerns with affirmative consent were about the specific law reform issue.

“This is a law reform question that people can have different views about, while still sharing a firm commitment to condemning violence and protecting victims,” Finlay said.

Tame also said it was “inexcusable” that Higgins, who was the main catalyst for the summit, was not invited to attend and speak at the event.

“I think it’s inexcusable, and it’s very telling because this would have been a great opportunity to extend the olive branch,” she said.

Higgins was invited though as a delegate by the ACT government and Victims of Crime Commission at the last minute but criticised the difference in the prime minister’s words and actions.

“While I respect the Prime Minister Scott Morrison’s “ambitious spirit” for the National Women’s Security Summit 2021—I just can’t match this Government’s actions with the platitudes and warm sentiments they are all extending today,” Higgins wrote on Twitter.

Meanwhile, Minister for Women Marise Payne told the summit that she had seen “enormous changes” in societal attitudes towards the treatment of women, and society should continue to challenge behaviour that justifies violence.

“We have to encourage role models for the behaviours that we want to see and promote respect in all settings,” Payne said.