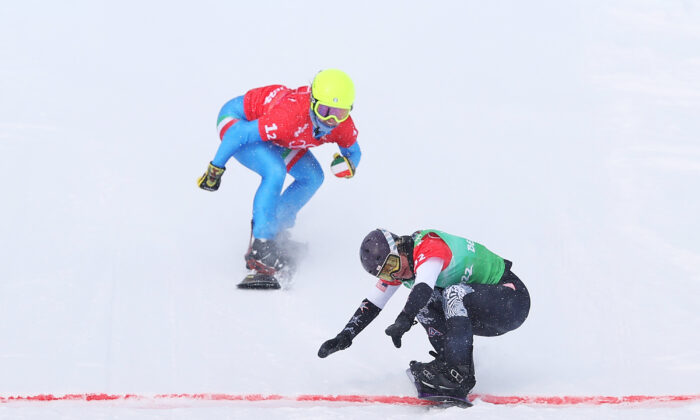 More than a week into the Beijing Winter Olympics, which opened on Feb. 4, a range of controversies from referees’ decisions to China’s harsh COVID controls have drawn complaints from competitors and international observers.

On the night of the opening ceremony, Sjoerd Den Daas, a reporter for NOS, the Netherlands’ public service broadcaster, was forcibly removed from his broadcast position outside Beijing’s National Indoor Stadium by Chinese Communist Party (CCP) security personnel, resulting in the interruption of the live TV broadcast. The whole process was captured on camera.

During the opening ceremony, a woman in a pink hanbok, a traditional Korean dress, marched with the Chinese flag, drawing the ire of South Koreans.

Adding to the public anger in South Korea, South Korean short-track speed skaters Hwang Dae-heon and Lee Joon-soo were disqualified from the men’s 1,000-meter semifinals for violating rules on Feb. 7. In the final, Liu Shaolin of Hungary crossed the finish line first, but was disqualified for a yellow card warning, leaving him without a medal.

South Korean media expressed strong dissatisfaction and accused the Olympic judges of favoring China. While the Korean and Hungarian teams appealed to the International Skating Federation (ISU), both were rejected. Accordingly, the Korean team decided to file a lawsuit with the Court of Arbitration for Sport (CAS) and lodge a protest against International Olympic Committee (IOC) President Thomas Bach.

Hajime Takamine, a Japanese commentator, told The Epoch Times that judging from the referees’ decisions, they were biased in favor of the Chinese team, and it’s possible that the CCP gave benefits to the referees who are supposed to be impartial.

“I think the CCP has used the Olympics to show how powerful it is by roping in and deceiving people through various means, because it believes that the outside world can do nothing about it.”

There have also been complaints from foreign athletes and coaches that the food available at the Beijing Games doesn’t meet athletes’ physical needs.

After testing positive for COVID-19, Russian athlete Valeria Vasnetsova complained that she was served the same food for five days at the isolation hotel in Beijing.

“The catering is extremely questionable because really it’s not catering at all. There are no hot meals,” German skiing coach Christian Schwaiger said. “There are crisps, some nuts and chocolate, and nothing else. This shows a lack of focus on high-performance sport.”

Fortunately, the U.S. team came prepared, bringing along some camping food such as bagged pasta that can be cooked in hot water.

Finnish ice hockey forward Marko Anttila tested positive for COVID-19 after arriving in China. However, Anttila’s test had always been negative before the trip, according to Finnish head coach Jukka Jalonen, saying that Anttila had been with his players and coaches and hadn’t been exposed to anyone else.

“We know that he’s fully healthy and ready to go and that’s why we think that China, for some reason, they won’t respect his human rights, and that’s not a great situation,” Jalonen said at a press conference.

The IOC statement acknowledged that it had received some complaints from athletes, particularly about the temperature, type, and portion size of food, and promised to work with organizers to resolve the concerns.

Commenting on the fact that athletes participating in the Beijing Winter Olympics were all given a free cellphone, current affairs commentator Ji Lin told The Epoch Times that the CCP is actually using these phones to monitor athletes, and then using big data to turn the Olympic Village into a small surveillance society inside China, a large surveillance society.

The commentators said that the performance of the CCP in this Winter Olympics will make more countries recognize the regime’s abusive practices.

“I don’t believe athletes from all over the world won’t talk about what they saw and heard during the Olympics. It is likely that in the near future, more countries and louder voices will attack and condemn the CCP for its egregious human rights practices,” Takamine said.