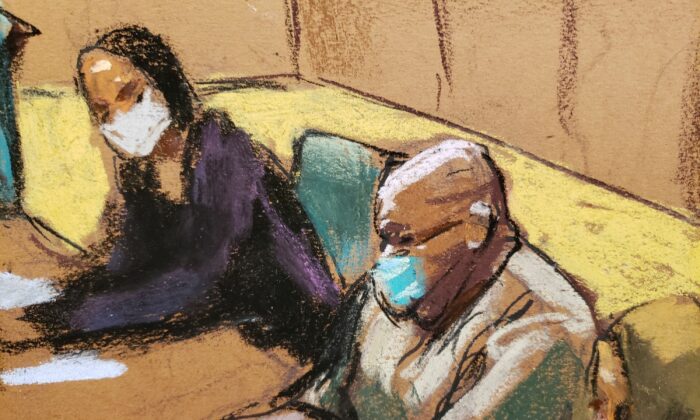 In this courtroom sketch Frank James, the suspect in the Brooklyn subway shooting, sits as he appears during his court hearing in New York City, on Apr. 14, 2022. (Jane Rosenberg/Reuters)
Crime and Incidents

NEW YORK—A man charged with last month’s mass shooting in a New York subway, one of the most violent attacks in the history of the city’s transit system, pleaded not guilty to terrorism and weapons charges in Brooklyn federal court on May 13.

Frank James, 62, is accused of carrying out an April 12 gunfire and smoke bomb attack that injured 23 people. Dressed in khaki prison clothes, he entered his plea before U.S. District Judge William Kuntz.

James’s lawyer, Mia Eisner-Grynberg from the Federal Defenders of New York, didn’t seek to have her client released on bail, and declined to comment after the plea.

Ten people were shot in the attack, which unfolded as a Manhattan-bound N train was pulling into the 36th Street station in Brooklyn’s Sunset Park neighborhood during the morning commute. Thirteen others were injured in a frantic rush to flee the train; no one was killed.

The incident set off a round-the-clock manhunt that culminated in James’s arrest some 30 hours later. After his arrest, Eisner-Grynberg said James saw his photograph in the news and then called the New York Police Department’s tipline to turn himself in.

A motive for the attack remains unclear. Police say James, a Bronx native with recent addresses in Philadelphia and Milwaukee, posted videos on YouTube prior to the attack in which he addressed New York City Mayor Eric Adams and complained about the presence of homeless people on subway cars.

The attack followed a string of violent crimes in America’s largest metropolitan transit system, including instances of commuters being pushed onto subway tracks from station platforms.

James could face life in prison if convicted on charges of carrying out a terrorist attack on a mass transit system and discharging a firearm during a violent crime.

By Luc Cohen and Brendan Pierson