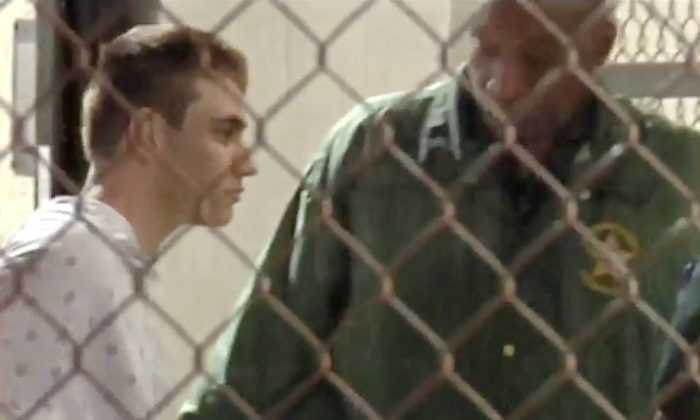 PARKLAND, Florida—The 19-year-old man accused of killing 17 people at a Florida high school fled hidden in a crowd of frightened students and visited two fast food restaurants before he was arrested less than two hours after the massacre, officials said on Thursday.

Authorities said the alleged gunman, Nikolas Cruz, stopped at a Wal-Mart, a Subway restaurant and a McDonald’s immediately after carrying out the second-deadliest mass shooting at a public school in U.S. history.

“The suspect crossed fields and ran west along with others who were fleeing and tried to mix in with the group that were running away, fearing for their lives,” Broward Country Sheriff Scott Israel told reporters.

Cruz, who has been charged with 17 counts of premeditated murder, is accused of using a legally purchased AR-15-style weapon in Wednesday’s attack, moving through Marjory Stoneman Douglas High School in Parkland outside Miami. Cruz was a former student of the school who had been expelled.

The accused shooter may have left warning signs on social media in the form of a comment on YouTube video that read “I’m going to be a professional school shooter.” A YouTube user passed that comment on the Federal Bureau of Investigation in September, but the FBI did not connect it to Cruz.

“No other information was included with that comment which would indicate a time, location or the true identity of the person who made the comment,” FBI Special Agent in Charge Robert Lasky told reporters. He noted that the YouTube user who reported the comment lives in Mississippi and said that investigators saw nothing to link it to Florida.

Wednesday’s shooting was the 18th in a U.S. school this year and has stirred debate again on U.S. gun laws, with some groups calling for a ban of guns altogether. The right to bear arms is protected by the Second Amendment of the U.S. Constitution.

“It is not enough to simply take actions that make us feel like we are making a difference,” Trump said at the White House. “We must actually make that difference.”

Democrats in the U.S. House of Representatives criticized the Republican leadership for refusing to take up legislation on tightening background checks for prospective gun buyers.

“It’s appalling,” Representative Mike Thompson told reporters. “Thirty people every day are killed by someone using a gun, and the best we can do is say we need more information?”

The Republican-controlled Congress last year revoked Obama-era regulations meant to make it harder for those with severe mental illness to pass FBI background checks for guns, saying the rule deprived the mentally ill of their gun rights.

Cruz’s court-appointed lawyer said he had expressed remorse for his crimes.

Cruz loved guns and had been expelled from high school for disciplinary reasons, police and former classmates said.

Cruz told police that he had carried out the attack, according to an arrest document released on Thursday, which noted that he made that admission after being advised of his right not to incriminate himself.

In a brief court appearance, Cruz spoke only two words, “Yes ma’am,” when a judge asked him to confirm his name. He was ordered held without bond.

Cruz had recently moved in with another family after his adopted mother died of pneumonia in November, according to Jim Lewis, a lawyer representing the family, bringing his AR-15 along with his other belongings.

According to Lewis, the family believed Cruz was depressed, but attributed that to his mother’s death and not mental illness.

People who live on same street as Cruz said he alarmed them by shooting squirrels and rabbits in the neighborhood as well as chickens being raised in a nearby backyard. Several times a year, they observed law enforcement officials at his house.

“Killing animals was no problem for this young man,” said Rhonda Roxburgh, 45, who lived on the block for several years and whose parents continue to live there.

Florida law enforcement officials announced late on Thursday that no verified connections between Cruz and a white nationalist hate group called the Republic of Florida (ROF) have been found, reported The Tallahassee Democrat, a USA Today affiliate.

Lt. Jordan of Leon County Sheriff’s Office in Tallahassee, where the white nationalist militia known as Republic of Florida is based, said his office has "very solid" info on the group & "there’s no known ties that we have that we can connect" Cruz w/group https://t.co/qqLYNtWbQ8

Jordan Jereb, self-proclaimed leader of ROF had earlier made an unverified claim that Cruz participated in paramilitary training with around a dozen members of the scant group. The claim was first reported by the left-leaning Anti-Defamation League, and was soon picked up by the Associated Press and other media outlets, reported The Dailywire.

“It may seem odd that Jereb would bring attention to his group by claiming a connection to Cruz, but Jereb has always been somewhat of a publicity seeker,” the Southern Poverty Law Center (SPLC) said in a statement. The law center has been monitoring the ROF since 2014.

“In 2014, in fact, he wrote us to complain that we had not already listed ROF as a hate group,” the SPLC said in a statement, referring to Jereb.

“In April 2017, Michael Tubbs, the leader of the Florida chapter of the League of the South, a well-known hate group, wrote that Jereb ‘never misses a photo op’ and called him ‘a nut job who should be avoided,'” the statement read.

By Bernie Woodall and Zachary Fagenson