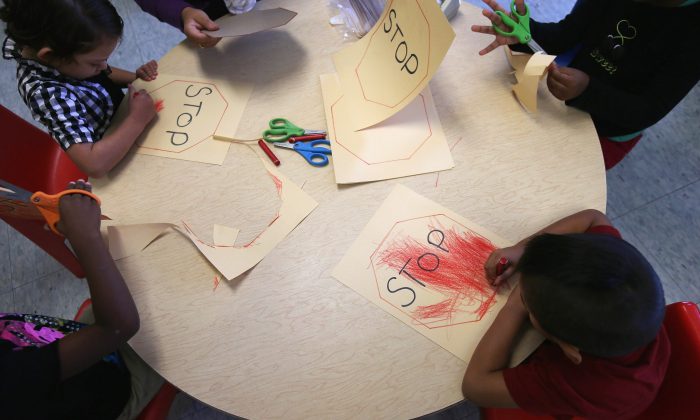 Children from low-income families draw at the federally funded Head Start school on Sept. 20, 2012, in Woodbourne, N.Y. Poor and low-income children are less safe than their affluent peers, according to a new report. (John Moore/Getty Images)
US

WASHINGTON—Children from low-income families are at greater risk than other children from unintended injuries and deaths, such as from drowning, car accidents, burns, suffocation, falls, and poisoning, according to a June 17 report.

The report, prepared by the Consumer Federation of America (CFA) and sponsored by Underwriters Laboratories (UL), also suggests that economic deprivation is a factor in bacterial, parasitic, and viral infections resulting in foodborne illness in children.

Unintentional injuries were singled out because they are the leading cause of death and injury for children from 1 to 14 years old, according to government databases. Children are at a much greater risk of product-related injury and foodborne illness than adults.

“Each year, such injuries are responsible for about 5,000 child deaths, over 5 million child emergency room visits, and millions of unreported injuries,” states “Child Poverty, Unintentional Injuries and Foodborne Illness.”

If poverty and low income are a significant factor of whether a child is injured or dies as the report claims, a lot more children than people realize are affected.

Columbia University’s National Center for Children in Poverty defines low income as twice the federal poverty level, which would be $44,700 for family of four. By this definition, of the nation’s 73 million children, over 44 percent are in low-income families.

The two main sources for hard data on product-related injuries are the National Electronic Injury Surveillance System (NEISS), administered by the Consumer Product Safety Commission (CPSC), and WISQARS (Web-based Injury Statistic Query and Reporting System), administered by the CDC. The NEISS data is a scientific sample of emergency rooms that provide information on injury or death linked to a consumer product.

Neither of these data sources collects information on household income, nor the association between income and injury, according to the report. The CFA report relies instead on dozens of academic studies—some quite old—which contain research pointing to a very strong correlation.

An explanation could be supplied by a 2005 study cited in the report of a national telephone survey which “learned that fire extinguishers, fire escape plans, and carbon monoxide alarms were much less likely in the lower-income homes,” according to the report.

An interesting table in the report shows two columns: states with the highest rates of child poverty and states with the highest per capita fire death rate. The top 10 states for child poverty and fire death rates are listed. A majority, 6 of the 10 states in the first column—District of Columbia, Arkansas, Mississippi, Alabama, Tennessee, and Kentucky—are also found in the second column.

The report cited an injury study in 2001 of children who were admitted to a hospital in Cincinnati. Examining the relationship between the children’s residences in census tracts (a proxy for socio-economic status) and incidence of injuries, the study found that poverty and unemployment were “significant risk factors for injury,” quoting the CFA report.

CFA would like to see CPSC and CDC remedy the absence of socioeconomic data in their databases—NEISS and WISQARS. While the National Health Interview Survey (NHIS), also administered by CDC, collects such data, it fails to publish correlations between socioeconomic status of children and injury and accident fatality rates. CFA recommends collecting data on the relationship between family income and product-related unintentional injuries and deaths.

The report recommends that the CDC and other federal agencies “require reporting agencies, such as hospitals, to include information on family income of children suffering injuries.”