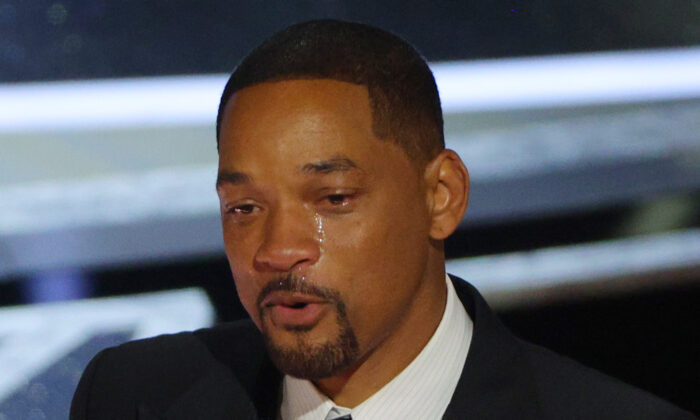 Will Smith cries as he accepts the Oscar for Best Actor in "King Richard" at the 94th Academy Awards in Hollywood, Los Angeles, Calif., on March 27, 2022. (Brian Snyder/Reuters)
Southern California

LOS ANGELES—The Academy of Motion Picture Arts and Sciences, organizers of the Oscars, will discuss possible sanctions against actor Will Smith at a special meeting April 8.

Possible actions could include making Smith ineligible for future awards or banning him from future Oscars ceremonies, according to Reuters.

The meeting was called by the president of the Academy’s board of governors after Smith slapped comedian presenter Chris Rock at the Oscars held last month.

The board was scheduled to meet April 18 to consider suspending or expelling Smith, but it was moved up after Smith resigned from the Academy April 1, saying he was heartbroken and would accept all consequences.

The Academy’s investigation into the incident followed Smith’s resignation.

Academy Board President Dave Rubin rescheduled the meeting in a letter this week.

“It is in the best interest of all involved for this to be handled in a timely fashion,” Rubin told the board.

Following Smith’s resignation of his Academy membership, suspension or expulsion are no longer a possibility and the legally prescribed timetable no longer applies, Rubin said in the letter.

Rock publicly responded to the incident during a live show in Boston, telling the audience he was still processing what happened.

During the 94th Oscars show, Smith appeared to respond to Rock’s joke about his wife, Jada Pinkett Smith’s, hair. Smith walked on stage and slapped Rock, shocking the audience and viewers at home.

After the slap, Smith returned to his seat and yelled at Rock.

Later in the show, Smith gave a tearful acceptance speech after winning an Oscar for “Best Actor,” apologizing to the Academy. He later apologized on social media to Rock saying he was out of line.

The public and industry insiders called for action, including the suspension of Smith’s academy membership. Many also speculated whether the slap was staged to boost ratings.

The Academy quickly condemned the incident, convening an emergency meeting the day after the awards ceremony.

The April 8 meeting will be held on Zoom.