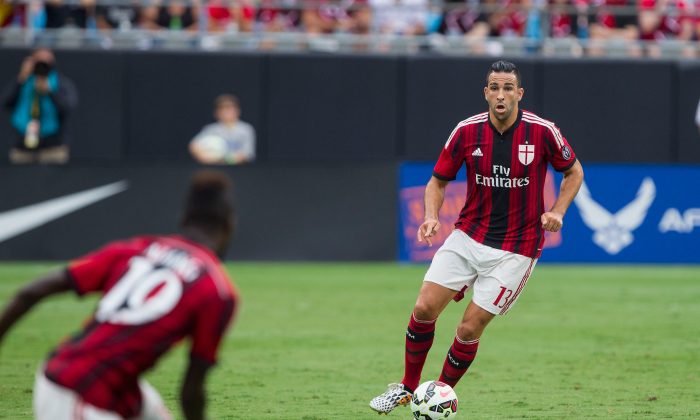 Adil Mai #13 of A.C. Milan passes the ball during first half action against Liverpool in the Guinness International Champions Cup at Bank of America Stadium on August 2, 2014 in Charlotte, North Carolina. Liverpool defeated A.C. Milan 2-0. (Photo by Brian A. Westerholt/Getty Images)
Europe

AC Milan will face Valencia in a Trofeo Naranja match on Sunday, August 17.

The game will be broadcast on La Sexta, GOL T,  in Spain.

Live streaming is available on beIN SPORTS CONNECT (US) and Gol Stadium (ESP).

ROME—Former Juventus manager Antonio Conte was confirmed as the new coach of Italy after signing a two-year contract on Thursday.

Conte will be presented at a news conference in Rome on Tuesday.

His contract was to July 31, 2016, following the European Championship in France.

Conte’s first match in charge will be a friendly at home to the Netherlands, in Bari on Sept. 4. Italy kicks off its Euro 2016 qualifying campaign away to Norway, five days later.

The 45-year-old Conte replaces Cesare Prandelli, who resigned — along with former FIGC president Giancarlo Abete — immediately after Italy’s early elimination from the World Cup in Brazil.

The FIGC said Conte’s deal, which will be in line with what Prandelli earned, also included bonuses for qualifying for Euro 2016, reaching the final, and improving the Azzurri’s world ranking by five or more places.

“Juventus wishes Antonio Conte all the best with his new role as coach of the Italian national side,” the club tweeted.