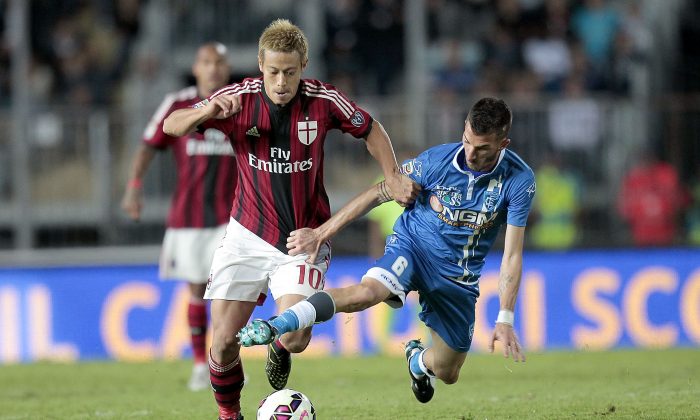 Mirko Valdifiori of Empoli Fc battles for the ball with Keisuke Honda of AC Milan during the Serie A match between Empoli FC and AC Milan at Stadio Carlo Castellani on September 23, 2014 in Empoli, Italy. (Photo by Gabriele Maltinti/Getty Images)
Soccer

AC Milan and Cesena are set to play in a Serie A match on Sunday, September 28.

The game will also air on SiriusXM FC and beIN Sports USA in the United States.

Milan are 4/6 to win the match, as compared to 11/2 for Cesena according to OddsChecker.

See an AP preview of this week’s Serie A games.

Roma and Juventus Look to Stay Perfect in Serie A

MILAN (AP) — It’s business as usual at the top of the Serie A table as joint leaders Roma and Juventus have maximum points heading into the fifth round of fixtures.

Juventus has yet to concede a goal and the three-time defending Italian champion visits Atalanta on Saturday. Earlier in the day, Roma hosts Hellas Verona.

There is also a derby match on Sunday night as Genoa entertains Sampdoria.

Here are the things to know about the Italian league entering this week’s games:

Juventus and Roma are the only sides which have won all four of their opening Serie A matches this season and new Bianconeri manager Massimiliano Allegri is slowly beginning to win his doubters round.

Roma pushed Juventus all the way last campaign and look set to do the same this time around after spending more than twice as much as any other Italian club in the preseason transfer market — 55 million euros ($71 million).

Coach Rudi Garcia insisted it is not yet a two-horse race for the title.

“Allegri has nothing to prove, he is a great manager and we know it,” Garcia said. “He has at his disposal a strong squad, which is looking to achieve top targets.

“We tried to reduce the gap in the summer, but it is still too early to talk about a Juventus-Roma duel.”

Juventus beat Cesena 3-0 on Wednesday to become the first team in Serie A history to win its opening four matches without conceding a goal.

Its invincibility goes back further, however, as goalkeeper Gianluigi Buffon has not had to pick a ball out of his net since April 28 — a run of nine matches.

“At the end of the day, it’s always nice to break records but winning is what counts,” Juventus defender Stephan Lichtsteiner said. “What has always been one of our strong points is that all the players attack and defend in unison.

“We have strikers and midfielders at our disposal who give their all and this offers us security.”

Title rival Roma conceded its first goal of the season in Wednesday’s 2-1 victory at Parma.

This weekend could see the first sacking of the Serie A season, with Napoli coach Rafa Benitez hanging on to his job by an ever thinning thread after a dismal start to the season.

Napoli was dumped out of the Champions League before the competition even really got started as it lost the playoff to Athletic Bilbao, and it has won just one of its opening Serie A fixtures.

The pressure continues to mount after Benitez’s team lost 1-0 at Udinese last weekend before letting slip a 2-0 advantage to draw 3-3 at home to newly-promoted Palermo on Wednesday.

“It’s a question of calmness which we’re lacking at the moment and we need to get back, but in order to do so we need results, we need to be solid and compact,” Benitez said. “I’ve got to work on our mistakes. But not being in the Champions League and having a difficult start to the season makes everyone more nervous. For that reason I say that we need to get our calmness back.”

Confidence has fallen in the AC Milan camp after a positive start to the season.

The mood was buoyant after Milan kicked off the season with two victories under new coach Filippo Inzaghi, but it lost at home to Juventus and was then forced to fight back from two goals down to draw at newly-promoted Empoli.

Milan is blazing in attack, having found the back of the net 10 times this campaign, and Fernando Torres scored in his first start for the club at Empoli.

However, it is looking decidedly shaky at the back, where it has already let in eight goals. Milan has not conceded as many goals in its opening four matches for 31 years and only Parma has a worse defensive record.

On Sunday, Milan visits Cesena, which has scored just three times so far this season.